BIG WIN FOR 67’S; DOWN FIRST-PLACE GENERALS TO REMAIN IN PLAYOFF HUNT 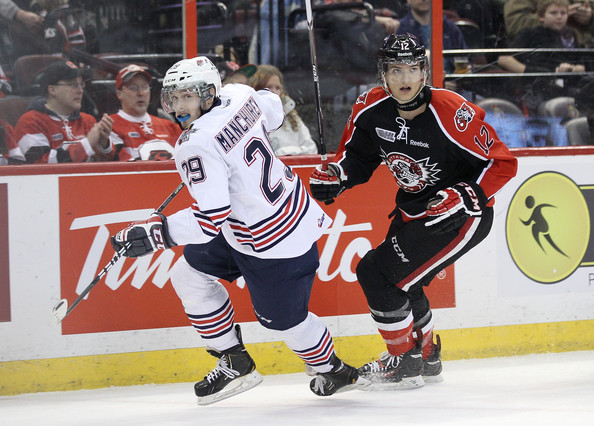 The Ottawa 67’s needed a big effort against a team they’ve got little success against this season to remain in contention for post-season contention and got just that on Saturday during a 4-1 victory over the Eastern Conference-leading Oshawa Generals at Canadian Tire Centre.

The line of Erik Bradford, Ryan Van Stralen and Travis Konecny continued to shine, combining for all four Ottawa goals, while Philippe Trudeau made his fifth straight start in net and made 33 saves.

Trudeau was seven seconds away from recording a shutout, but Stephen Desrocher scored on the Generals’ final shot of the game.

The win was Ottawa’s first in five starts against the Generals this season.

Van Stralen scored a hat trick, the second of his OHL career, to increase his goal total to 26 this season, while Bradford added a goal and rookie Konecny had two assists.

Konecny, who leads Ontario Hockey League rookies in scoring with 50 points after collecting two assists on Saturday, wowed the crowd in the first period, making a brilliant move around an Oshawa defender in the neutral zone in a play that led to a goal.

Konecny got by the defender on a deceptive out-and-in deke to get a clear shot on Oshawa goalie Ken Appleby. The goalie made a glove save but couldn’t trap the puck, which landed in the crease as a gift for a Bradford tap-in for Ottawa’s first goal.

Bradford displayed his own dazzling playmaking abilities in the second period on Ottawa’s third goal, making a no-look backhand pass from behind the net to Van Stralen who was in perfect position to muscle the puck behind Appleby.

Bradford, acquired in a trade from the Barrie Colts at the OHL trade deadline at the end of January, has eight goals and 11 assists in 11 games as a member of the 67’s.

The win, Ottawa’s 10th at home of the season, improves the team’s record to 17-28-1-3 and keeps the 67’s in the thick of the race for the final playoff spot in the OHL Eastern Conference. The 67’s began the game four points behind Niagara and six points back of Mississauga, the teams which hold the final two playoff spots in the conference.

The 67’s are back on home ice Tuesday night against the Peterborough Petes. Faceoff at Canadian Tire Centre is 7 p.m.