Bradford scores in OT to lift 67’s to victory 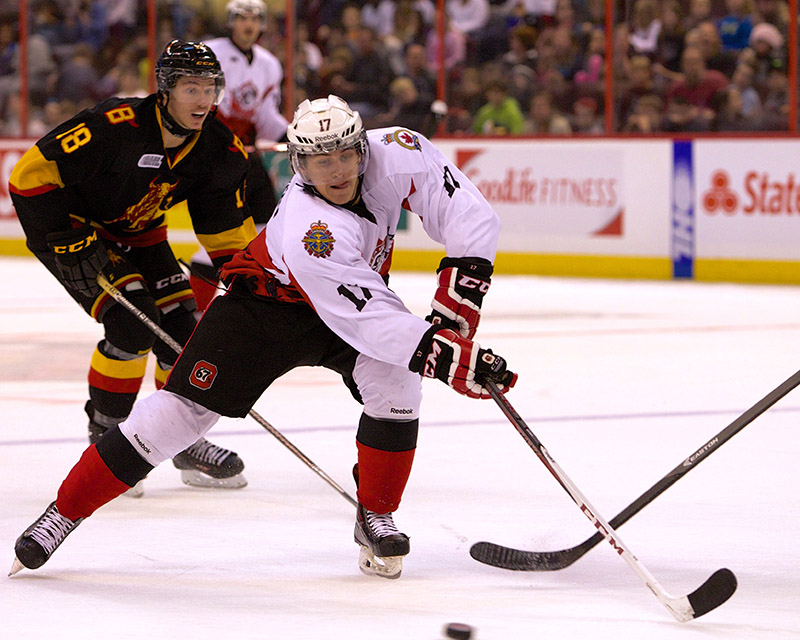 At Belleville, Erik Bradford scored the overtime winner on a breakaway after a feed from rookie Travis Konecny and added two assists as the Ottawa 67’s downed the Bulls 4-3 in Ontario Hockey League action Wednesday night.

Bradford now has 29 points in 16 games for the 67’s since being acquired in a trade with the Barrie Colts last month.

Konency also had a goal and a pair of assists in a victory that helped Ottawa gain ground in OHL Eastern Conference standings on Niagara and Mississauga which are battling the 67’s for the final playoff spot in the group.

The victory came at a price, however, as Ottawa’s leading goal scorer, Ryan Van Stralen, left the game in the opening period with an upper-body injury. Van Stralen, who had 28 goals heading into Wednesday’s game, will be evaluated on Thursday to determine the extent of the injury.

Dante Salituro and Brendan Bell also scored for the 67’s.

Philippe Trudeau made 35 saves to record the victory.

Ottawa faces the Generals in Oshawa on Friday night, then play the next home game Monday at Canadian Tire Centre against Owen Sound. Faceoff is at 2 p.m. in the Meet the REDBLACKS games that will include the introduction of the Canadian Football League team’s mascot and appearances by several players, including newly-signed quarterback Henry Burris and head coach Rick Campbell.