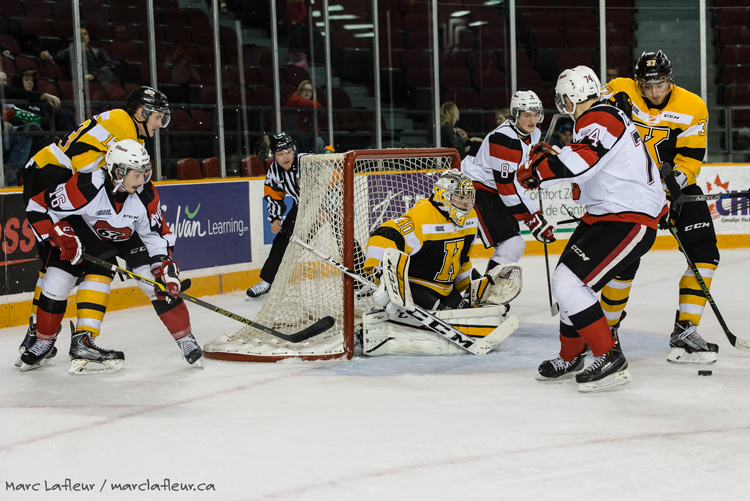 A reversed goal call and a hot goalie proved to be the turning point in Monday’s 5-2 defeat to the Eastern Conference leading Frontenacs.

With the playoffs a mere few weeks away, head coach and GM Jeff Brown saw his team ‘play for the number on front’ in Monday night’s tilt in Kingston as the 67’s opened a five-game road trip

“We put up 40 shots against the supposed top team in the East. There was no quit in our guys and I was proud of them,” said Brown.

Ryan Verbeek and Jeremiah Addison exchanged goals in a chance-filled opening frame with the Barber Poles taking advantage of the one of the most penalized teams in the OHL.

The Fronts would take the lead early in the second, but see their lead quickly erased by Drake Rymsha who netted his first goal since returning from injury.

Leading scorer Dante Salituro looked to have given Ottawa a 3-2 lead, but would see his go-ahead goal called back after review for offside. Moments later Kingston took  the lead through Juho Lammikko’s 18th of the season and less than two minutes later the Fronts made it a two-goal lead thanks to Conor McGlynn’s tally.

Leo Lazarev made several key stops in the final frame, but the 67’s were unable to mount a comeback despite firing 25 third period shots at Jeremy Helvig who stopped 37 of 39 shots on the night. Lawson Crouse added a late third period goal en route to the 5-2 win.

Brown was proud of his team’s performance Monday night and was equally pleased with the play of Rymsha. “He missed 3 months and now he’s getting his game back. That will give him confidence moving forward.”

Ottawa remains one-point back of Niagara for home-ice advantage of the opening round of the playoffs with seven games remaining in the regular season.

The 67’s road trip continues on Thursday when they visit the Barrie Colts for a 7:30 p.m face-off.