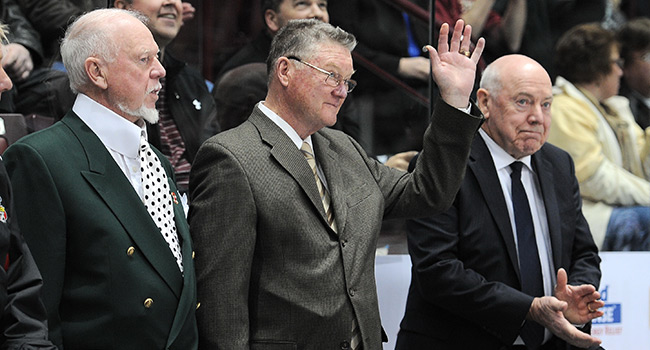 Kilrea won a CHL record 1,193 games in 32 years with the 67’s capturing MasterCard Memorial Cup titles in 1984 and 1999.  Last season he celebrated his 80th birthday by signing a one-day contract with the 67’s returning behind the bench for career victory 1,194 on Friday October 17, 2014, against the Mississauga Steelheads.  O’Brien coached alongside Kilrea for 23 seasons retiring in 2009, the same year he received the OHL’s Bill Long Award for Distinguished Service.  The pair have coached alongside Cherry in this event 15 times since 1996 including last season in St. Catharines.

Sutter played two seasons with the Lethbridge Broncos from 1974-76 amassing 173 points including 70 goals and 103 assists in 125 games.  He was selected by St. Louis in the second round of the 1976 NHL Amateur Draft and played in 779 NHL games with the Blues from 1976-88 before coaching 13 seasons behind the bench with St. Louis, Boston, Calgary, and Chicago.  In 1991 the Viking, AB, native received the NHL’s Jack Adams Award for Coach of the Year with the Blues who also retired his number 11 jersey in December, 1988.  Brian is the oldest of six Sutter brothers to play in the NHL, and also served one season as head coach of the Red Deer Rebels in 2007-08.

Armstrong played three seasons with the Red Deer Rebels from 1999-2002 collecting 204 points in 184 career games winning a WHL and MasterCard Memorial Cup Championship in 2001.  He also competed for Team Orr in the 2001 Top Prospects Game in Calgary scoring a goal and an assist in a 5-3 win.  Selected by the Pittsburgh Penguins in the first round of the 2001 NHL Entry Draft, the Lloydminster, SK, native played 476 career NHL games with Pittsburgh, Atlanta, Toronto, and Montreal.

Hanlon played three seasons for his hometown Brandon Wheat Kings from 1974-77 earning WHL Goaltender of the Year honours his final season posting an impressive 49 wins in 65 games which still stands as a WHL record.  Selected by the Canucks in the third round of the 1977 NHL Amateur Draft, Hanlon was a veteran of 477 NHL games with Vancouver, St. Louis, New York, and Detroit.  He later served as head coach of the Washington Capitals from 2003-07 and also worked two seasons as an assistant coach for the Giants from 2011-13.

Warriner played three OHL seasons between the Windsor Spitfires and Kitchener Rangers producing  224 points in 162 games from 1990-93.  The Blenheim, ON, native was the fourth overall pick by the Quebec Nordiques in the 1992 NHL Entry Draft and played 453 career games primarily with the Toronto Maple Leafs, also competing for Tampa Bay, Phoenix, Vancouver, Philadelphia, and Nashville.

In addition, support staffs for the 2016 BMO CHL/NHL Top Prospects Game will include Athletic Therapist Phil Varney of the Seattle Thunderbirds and Equipment Manager James Stucky of the Everett Silvertips as part of Team Cherry, while Giants Athletic Trainer Nick Murray and Equipment Manager Shingo Sasaki will work with Team Orr.

All 40 players competing in the 2016 BMO CHL/NHL Top Prospects Game were listed in NHL Central Scouting’s Midterm Rankings released on Tuesday.  Team Orr captain Matthew Tkachuk of the London Knights is the top ranked North American skater headlining a group of 21 CHL players in the top-30.  Team Cherry captain Tyler Benson of the host Giants is also a first round candidate ranked 21 among North American skaters.

The 2016 BMO CHL/NHL Top Prospects Game is proudly supported by title partner BMO Bank of Montreal, and CHL associate sponsors Cooper Tire, autoTRADER.ca and Sherwin-Williams.  The game will be broadcast live across Canada on Sportsnet, TVA Sports, and in the United States on NHL Network.