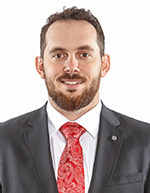 One of the long-standing members of the Ottawa 67’s, Chris Hamilton has been with the team since 2009. He joined as an assistant then and became the Head Equipment Manager in 2012.

At the 67s, Hamilton spends long, long hours ensuring everything is ship shape for the players and for the game.

He grew up playing hockey as a goalie (idolising Chris Osgood) and understands the emotions that the 67’s players go through. This helps him connect with the players while performing his chief role as the equipment manager.

From being a skate sharpener and sewing man to a shoulder for the players when things go south, ‘Hammy’ is an vital member of the 67’s bench. He was awarded the 67s’ Team MVP for the 2012-13 season.