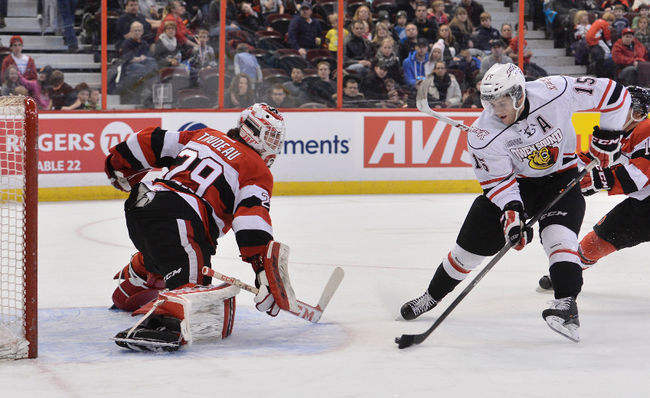 Down 4-0 early in the second and 6-3 heading into the third, Ottawa managed to tie the game late in the final period and earn a key point during a 7-6 overtime loss to the Owen Sound Attack in Owen Sound.

Nevin Guy, from Mountain and the Winchester Hawks Junior B, scored his sixth goal of the season with 1:09 left in regulation to meld the score at sixes and send the game into the extra period.

But the knot was unravelled quickly, as Zach Nastasiuk scored a hat trick goal by beating Ottawa goalie Philippe Trudeau 33 seconds into overtime to placate the home fans and disappoint the 67’s who were hoping to gain an extra point to count in the tight race for the eighth and final playoff spot in the Ontario Hockey League’s Eastern Conference.

The 67’s sit in ninth after yesterday’s result, one point behind the Mississauga Steelheads and Niagara IceDogs in those standings, after Niagara won in North Bay.

That sets up a crucial game at Canadian Tire Centre. With only six games remaining in the regular-season schedule, the 67’s host Mississauga at 7 p.m. on Tuesday. Ottawa will need the same kind of pluck on Tuesday that was evident during Sunday’s game, as they twice came back from what seemed to be unredeemable deficits.

Dante Salituro, Travis Konency and Brendan Bell reeled off goals in the second period to narrow a 4-0 deficit, but Nastasiuk and Kurtis Gabriel tallied to give the Attack a three-goal cushion heading into the third.

Brett Gustavsen began the Ottawa comeback with a power-play marker six minutes into the final period. Bell inched Ottawa to within one at 12:52, and Guy managed his heroics, after a feed from 67’s captain Bell, with just over one minute remaining in regulation. Bell had a pair of assist to complement his two goals, while Troy Henley, Jonathan Duchesne and Erik Bradford also had multi-point games with two helpers each.