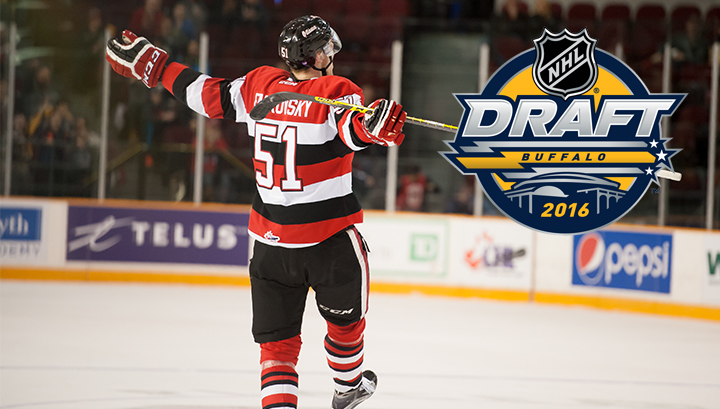 The Ontario Hockey League today announced that 67 OHL players have been listed by NHL Central Scouting in their Final Rankings for the 2016 NHL Draft which takes place June 24-25 in Buffalo, New York.

A total of 149 CHL players appeared in the rankings led by the OHL’s 67, followed by 54 from the Western Hockey League, and 28 from the Quebec Major Junior Hockey League.

The Ottawa 67’s have three players among them, with Stepan Falkovsky ranked at 91, Travis Barron at 94, and Dante Salituro, who will enter his second NHL Draft, is ranked at 172 among North American skaters.

11 of the top-30 ranked North American prospects are from the OHL including six of the top-10 led by Matthew Tkachuk of the London Knights at number two, followed by Alexander Nylander of the Mississauga Steelheads at number three.

Two OHL defencemen round out the top-5 with Jakob Chychrun of the Sarnia Sting listed at four, and the Knights’ Olli Juolevi at five.  A pair of Windsor Spitfires complete the OHL’s representation in the top-10 with forward Logan Brown listed at number seven, and defenceman Mikhail Sergachev right behind at number eight.

The Knights’ Tyler Parsons is the first of nine OHL goaltenders ranked at number three, with Joseph Raaymakers of the Soo Greyhounds at number nine, and Dylan Wells of the Peterborough Petes listed at 10th.

The London Knights led all OHL clubs with eight players on the rankings followed by the Hamilton Bulldogs and Mississauga Steelheads with six respectively.

67 OHL players were listed in NHL Central Scouting’s Midterm Rankings released in January, while 31 players from the OHL were selected in the 2015 NHL Draft including seven first round picks.