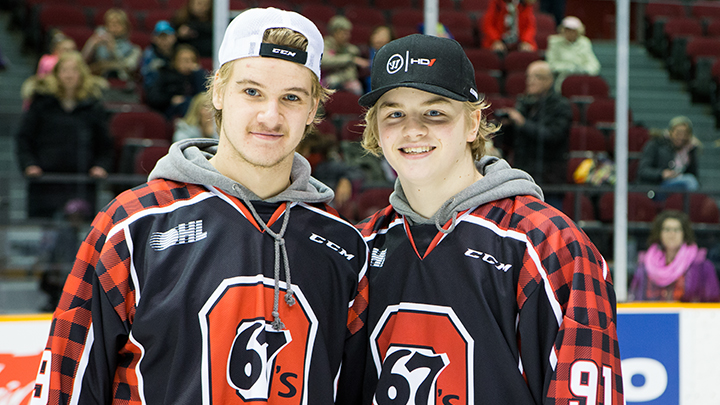 “I thought it was just a joke,” said Barron, recalling an October trade that brought former teammate and best friend Drake Rymsha to the Nation’s capital.

The peaks and valleys of an NHL draft year are no secret, something made much easier when you’re going through the journey with a friend, a brother, and a former teammate.

“He’s like my brother, I’ve lived with him and I’ve known him for pretty much my whole life,” Rymsha said. “It makes things a lot easier out there when I’m together with him.”

Rymsha and Barron, two 17-year old forwards, found themselves reunited in Ottawa thanks to an early season trade that saw the London Knights send Rymsha to the 67’s for a 2018 second round pick. Rymsha, a draft pick of the Knights, left home at the age of 14 and moved in with the Barron family in Toronto where he became exposed to the GTA and the OHL in Major Bantam.

The pair went on to finish second and third in scoring for the GTHL’s Minor Midget Toronto Jr. Canadiens, behind only Jakob Chychrun, before going their separate ways in the OHL Priority Selection.

“We started off everywhere together: our OHL draft year together, our first day of high school together,” Barron said. “I’ve travelled the world with him.”

Things took a sharp left just 14 games into Rymsha’s time in Ottawa, as he broke his femur that required surgery — a recovery that was expected to last until mid March. Rymsha worked hard and came back early, returning to the 67’s in time for a three-game homestand two weeks ago, helping his club to four of six points over the long weekend.

“It’s just great having him here and having him back after those long three months,” Barron said. “We’ve got a good thing going on the ice now. I just love (Rymsha), he’s a brother to me and I’m excited for the next couple of years together.”

Both players have been identified as potential mid to late round picks in the 2016 NHL Draft and are now showcasing their abilities with Russian import Artur Tyanulin on their right side.

“We have good chemistry out there, we know where each other are, we can get on each other without the other person getting angry at the other,” Rymsha said. “We have a special bond together and we’ll friends for the rest of our lives.”