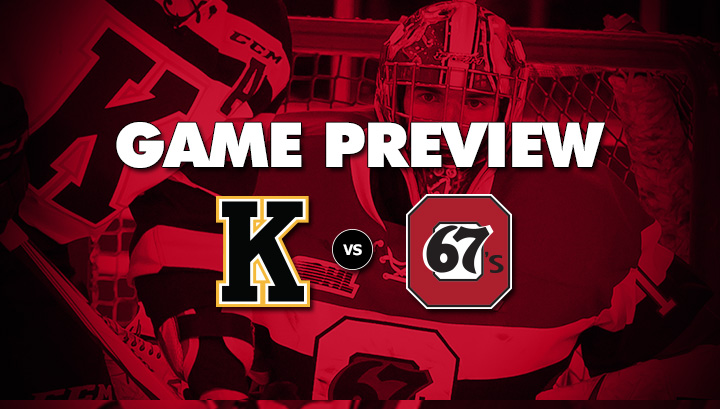 Ottawa returns to TD Place after an arduous three-game weekend in the most western part Ontario. The 67’s dropped games to Kitchener, London, and Sarnia. They’ll try to get back in the win column the Kingston Frontenacs in their third matchup of season at 7 p.m. tonight.

Great seats are still available here, by calling 613-232-6767 x1, or pick them up directly from the TD Place Box Office located beside Gate 3.

Though the Fronts may be leading the OHL’s Eastern Conference, it’s the 67’s that have bested their division rivals in both head-to-head battles this season.

Their first meeting, Ottawa’s School Day Game at Canadian Tire Centre, saw the Barber Poles shut down Kingston’s offence and defeat them 2-1. Defenceman Stepan Falkovsky scored the game-winner and goaltender Leo Lazarev stopped 27 of 28 shots he faced in the victory.

The two teams most recent match came at the end of Ottawa’s longest road trip of the season. Over 12 days, the Barber Poles traveled 2152 kilometers and collected 16 of a possible 22 points away from TD Place.

They downed the Fronts at K-Rock Centre two weeks ago, in a dominant 6-2 trouncing. Kingston’s starting netminder Lucas Peressini was pulled in the second period after allowing four goals on 15 shots.

The 67’s spread the points around that night, as 11 players collected a point or more. Jeremiah Addison, Travis Konecny, Dante Salituro, Sam Studnicka, and Artur Tyanulin all chipped in with two in the win.

Since that embarassing loss though, the Fronts have certainly rebounded. They’ve only lost one game in their last five and scored 20 goals over that stretch.

Kingston captain Roland McKeown has been a big part of that. He’s racked up four points (1G,3A) already in December and jumped into the scoring lead among OHL defenceman.

The 67’s will need to rein in McKeown and the rest of Kingston’s top players if they hope to take two important points against the division leading Fronts.

The 67’s Holiday Game is set for this Sunday (December 13) at 3 p.m., don’t miss this annual event that features the Teddy Bear Toss, Sing-for-Santa and a post-game autograph session with the team.