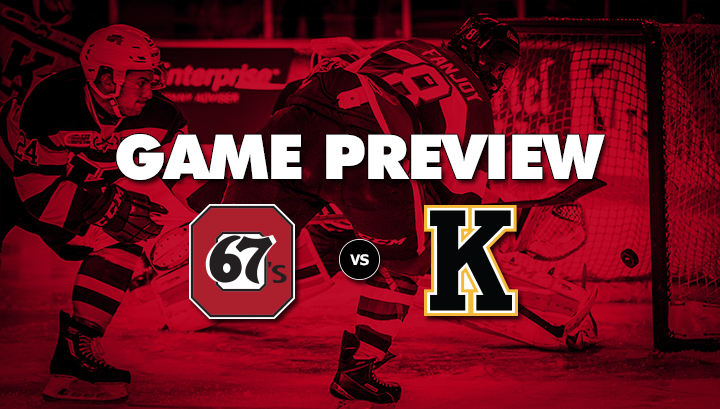 Ottawa travels to the K-Rock Centre for a rare Monday meeting with the OHL’s Eastern Conference leading Frontenacs at 7 p.m. tonight. The 67’s are in Kingston to end a 10-day stretch that saw them play six games, starting at TD Place versus the Fronts.

The two teams met last on Friday, February 19, with the Fronts earning a 5-2 victory at The Arena at TD Place. Leading Kingston offensively were Juho Lammikko, Chad Duchesne, and Jared Steege, who all tallied two points in the contest.

Another winger racking up the points for Kingston is LA Kings prospect Spencer Watson. The speedy forward has been lights out in February, scoring 11 goals and adding 14 assists in 10 games this month.

Frontenacs backup netminder Jeremy Helvig, who has seen a lot more action since the Fronts clinched a playoff spot, turned away 28 of 30 Ottawa shots on the way to his 14th victory of the season. Helvig hasn’t lost in regulation since October 30, posting a record of 15-2-0-1 with a 2.17 GAA and a .928 save percentage.

The 67’s should be playing desperate hockey tonight, as they are only two points back of fourth in the Eastern Conference. A win tonight would go a long way in securing home ice for the upcoming postseason.

Ottawa (63 pts) currently sits in sixth place, one point up on Peterborough (62 pts) and one back of Niagara and Mississauga (each with 64 pts). Barrie and North Bay have put some distance between themselves and the rest of pack, presently ranked in second and third respectively.

Who gets the net for the Barber Poles is anyone’s guess tonight. Leo Lazarev started both matches this past weekend against Sudbury and London at The Arena at TD Place, though Liam Herbst entered Saturday’s contest versus the Knights in relief of Lazarev in the third period.

The 67’s are out on a five game road trip with stops in Kingston, Barrie, Guelph, and Hamilton, before arriving back in Ottawa to face the aforementioned Colts at TD Place on March 19. Sweet seats are available by clicking here, calling 613-232-6767 x1, or in person at the TD Place Box Office.