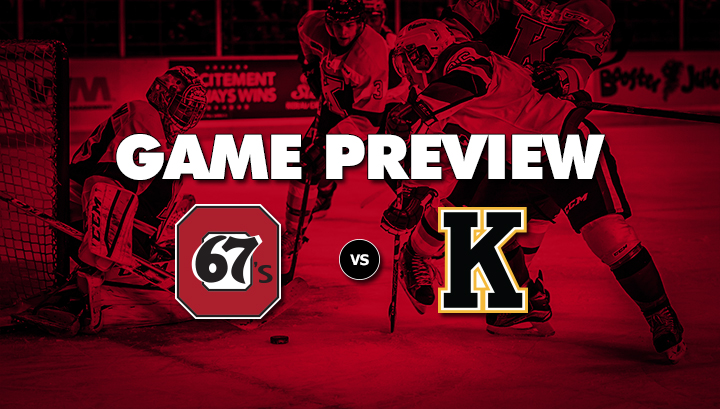 The 67’s finish up their current five-game road trip in Kingston at 7 p.m. tonight, as they face-off against the Frontenacs for the final time this season.

After losing three straight to OHL powerhouses London, Barrie and tonight’s opponent, Kingston, Ottawa has bounced back, claiming two consecutive wins over the Guelph Storm and Hamilton Bulldogs. The 67’s combined for 10 goals in the two victories, while only allowing three against.

Your captain, Jacob Middleton, racked up five assists in the two contests and now has six goals and 23 helpers this season, setting new career highs in points and goals. Forwards Dante Salituro and Artur Tyanulin both scored twice and added two assists as well.

Netminder Leo Lazarev picked up both W’s, pushing his wins total to 24 on the season, 10 more than 2014/15. Lazarev ranks sixth among OHL goaltenders now and will the key to an extended postseason run for the 67’s.

The Barber Poles find themselves in seventh place in the Eastern Conference standings, an astounding 25 points back of the Fronts, who lead the East. With four games left in their season, Ottawa will most likely finish somewhere between fifth and seventh.As for their first round opponent, that spot is still very much up for grabs.

The Barrie Colts are securely locked into second and will meet whichever team ends the season as the seventh seed. North Bay sits in third with 74 points, though Niagara is just four points behind with 70 and Peterborough and Mississauga are both six points back with 68.

The 67’s can’t scoreboard watch though, they have to go out and focus on what they can control and that starts tonight in Kingston. The Fronts have been one the OHL’s hottest team since the trade deadline, winning 19 of 25 games.

A huge part of that amazing run have been wingers Spencer Watson and Michael Dal Colle. The duo has combined for 85 points in those 25 games since January 11. Both have buried 21 goals, while Watson (23A) added two more assists than Dal Colle (21A) over that time.

While those two have lighting the lamp more often than not, two other Fronts forwards have been frustrating first lines across the league. Juho Lammikko and Lawson Crouse have been throwing their weight around and defending against the league’s best players all season long. Though their names may not be atop the Fronts scoring race, they have played an integral role in their team’s incredible success this year.

The 67’s are back in Ottawa on Wednesday, March 19 versus the Colts at TD Place. Sweet seats are available by clicking here, calling 613-232-6767 x1, or in person at the TD Place Box Office.