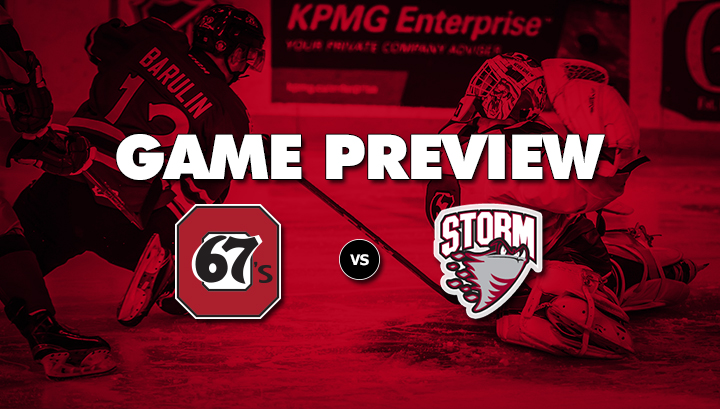 The 67’s will look to snap a three-game losing streak, as they attempt to weather the Storm tonight at 7:30 p.m. in Guelph. The Storm are also mirred in their own skid, dropping five straight and nine of their last 10.

Ottawa fell 6-2 at the hands (or hooves) of the Barrie Colts last night. It was third match in a row that the Barber Poles have given up five goals or more. They shouldn’t have that problem tonight in Guelph, as the Storm has produced the OHL’s lowest offensive totals.

Guelph’s goals for (132) this season is so bad, the next lowest, Sudbury’s 164, is 32 goals more. These two basement dwellers are the only teams in the league to be outscored by more than 100 over the year.

Even worse, the Storm don’t have a single player on their roster in the top-60 of league scoring. Third-year winger James McEwan is their top point producer and has 23 goals and 20 assists in 59 games.

When these clubs last met, Ottawa came away with a 4-1 victory at The Arena at TD Place. Forward Jeremiah Addison tallied two points (1G, 1A) in the win, while nine other Barber Poles chipped in with at least one point.

“Addy” is currently riding a five-game point streak that has seen him pick up three goals, four assists, and plus-7 rating over that stretch.

67’s netminder Leo Lazarev turned away 23 of 24 Storm shots in their last meeting. Look for him to get the start again this evening in Guelph, as fellow goaltender Liam Herbst allowed six goals on 28 shots in Barrie last night.

Though the Storm have been little more than a light breeze this season, the 67’s cannot lose focus. They need the two points immensely tonight, just to keep pace with the rest of the Eastern Conference.

The Peterborough Petes defeated the Hamilton Bulldogs 7-4 last night and therefore leap-frogged over Ottawa in the standings. The 67’s now sit seventh with 63 points, one less than the three teams, Mississauga, Niagara, and Peterborough, presently above them.

The 67’s are in the midst of a five game road trip with stops in Kingston, Barrie, Guelph, and Hamilton, before arriving back in Ottawa for rematch versus the Colts at TD Place on March 19. Sweet seats are available by clicking here, calling 613-232-6767 x1, or in person at the TD Place Box Office.