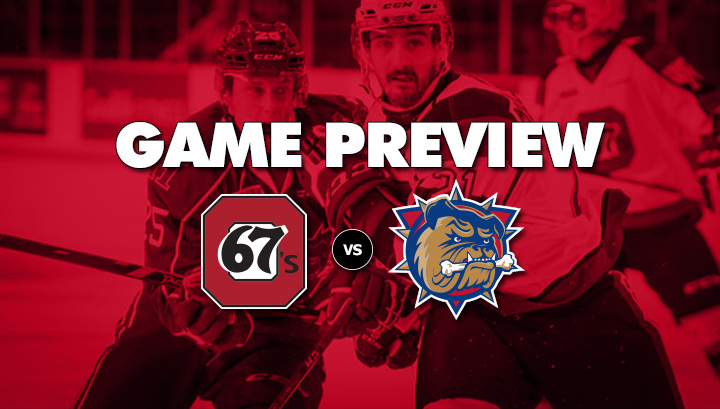 After winning a hard fought, back and forth battle in Niagara, the 67’s look to make it two in a row against canine foes in Hamilton tonight at 7 p.m. against the Bulldogs.

Ottawa is coming off a 6-3 victory over the IceDogs last night, which was their first meeting since Niagara eliminated the 67’s from the opening round of the 2015 OHL Playoffs.

With that road win, Ottawa keeps pace just behind the conference-leading Frontenacs. The 67’s possess 23 points and sit second in the OHL’s Eastern Conference, while Kingston has 26 points, but has played an extra game.

The Bulldogs, though, are currently living in the basement of the East Division, recording only six wins and 13 points total. They’re mired in a four game losing streak that has seen them give up 20 goals during that time. Consistency seems to be the Bulldogs biggest problem, as their offence has been outstanding at times.

Number one centre Stephen Harper has 13 goals and 13 assists in his first 18 games and is one of only three Bulldogs with a plus rating.

These two teams met just over a month ago, with the 67’s defeating Hamilton 5-1 at the Arena at TD Place. Check out the highlights below.

The 67’s return to TD Place on Friday, November 27 against the Sarnia Sting.