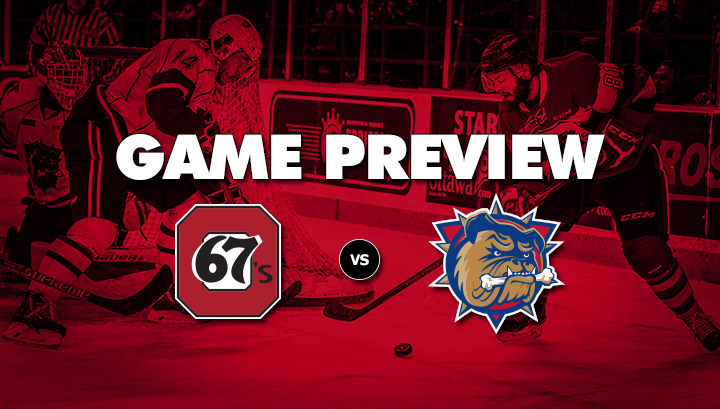 After clinching their second straight OHL playoff berth in Guelph on Friday, the 67’s travel south to Hamilton where they’ll face-off versus the Bulldogs at 3 p.m. today.

Ottawa’s offence re-emerged against the Storm, as they poured on six goals, snapping out of a three-game losing skid that saw them only score five goals.

Leo Lazarev was steady, stopping 23 of 25 shots and picking up his 23rd win of the season. The Russian netminder now boasts of 23-16-1, nine more wins then his entire 2014/15 campaign. Look for him to get another start today in Hamilton.

The captain, Jake Middleton, lead the way offensively, picking up three helpers on the night. Adam Craievich, Artur Tyanulin, Jeremiah Addison, and Dante Salituro all added two points each in the victory as well.

Salituro looks primed to finish among the OHL’s top 15 scorers for the first time in his career, as the 67’s winger has recorded 33 goals and 43 assists in 61 games this season.

Ottawa was not the only Eastern Conference club to secure their spot in the postseason this weekend, as Peterborough and Niagara also clinched with wins over Mississauga and Sudbury respectively.

One team that’s still in the hunt are the Bulldogs. Hamilton is in a battle with the reigning Memorial Cup champs, the Oshawa Generals, for the eighth seed in the East. The Gens currently sit two points up on the ‘Dogs and hold a game at hand as well.

With only five games left in Hamilton’s season, it will be challenging to overcome Oshawa. The Bulldogs did their part last night, handing the Guelph Storm their seventh straight win and collecting two important points. That victory was their first in three games, falling to the Petes, Sting, and Battalion over the last week. Hamilton allowed 15 goals in that trio of defeats, including six to North Bay and seven to Peterborough.

If the Bulldogs fail to make the playoffs, their future still looks bright. Rookie forward Matthew Strome, younger brother of Dylan and Ryan, has tallied 15 goals and 19 assists this season, good for 13th among first year OHLers.

The 67’s are in the midst of a five game road trip with stops in Kingston, Barrie, Guelph, and Hamilton, before arriving back in Ottawa for rematch versus the Colts at TD Place on March 19. Sweet seats are available by clicking here, calling 613-232-6767 x1, or in person at the TD Place Box Office.