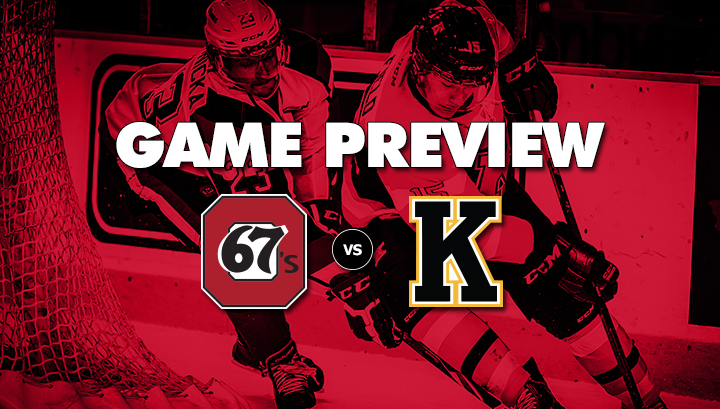 Ottawa wraps up their six-game road trip tonight with a stop in Kingston at 7 p.m. to face-off against the division-leading Frontenacs.

This evening’s matchup is a critical one for both clubs. The 67’s are only trail Kingston by three points for best record in the East. An Ottawa win cuts that margin to one, though a loss would give the Fronts a sizeable five-point edge.

On their current road trip, the Barber Poles have collected six of a possible ten points, with dominant victories over Niagara, Hamilton, and, most recently, Oshawa. In all three wins, Ottawa tallied six goals against the opposition. In total, over the five games away from TD Place, the 67’s have scored 23 goals.

Forwards Dante Salituro and Travis Konecny have led the way, racking up seven points each during that time. The duo of dynamic offensive stars presently sit 9th (33 points) and 14th (30 points) respectively among OHL scorers.

Goaltender Leo Lazarev must also being given major accolades for the 67’s success this season. “Lazer” has seemingly taken over the starting netminder role. He’s posted eight wins and two shutouts, and boasts a 2.68 GAA in 13 games played.

The Fronts also have a great mix of talent throughout their lineup. Captain Roland McKeown leads Kingston’s blue line with 21 points. Their back end was strengthen even moreso, when GM Doug Gilmour acquired defenceman Stephen Desrocher from the Oshawa Generals 17 games into the season.

Kingston is back on track after dropping a 2-1 decision to the 67’s at their annual School Day Game in early November. Since then the Frontenacs own a record 5-2 and have re-established their division dominance.

Ottawa will be in for a tough test against the Fronts tonight. This could be a game the 67’s look back on later in the season, as they fight for crucial points with their close rival.