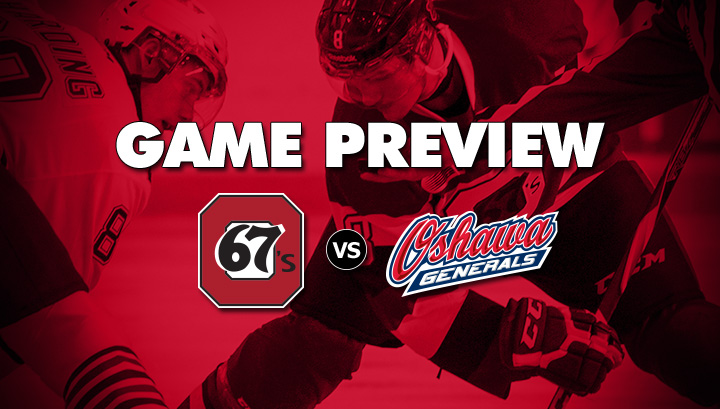 After dropping a 4-2 decision to the Hamilton Bulldogs, Ottawa falls to 2-2 on their current six game road trip. They’ll have the chance to get back on track tonight against the defending Memorial Cup champs, the Oshawa Generals.

The Gens are fresh off snapping a five-game losing streak with a 4-3 win over those same Bulldogs on Friday night. They gained a ton of confidence by ending that skid and will look to use that momentum to topple the Barber Poles for the first time this season.

The past two meetings between these clubs has rendered identical 4-2 victories for the 67’s. Ottawa hosted both match-ups and may be in for a surprise in the ‘Shwa.

The Generals may only have 10 wins this season, but six of them have come at home. The comforting confines of the General Motors Centre have ignited Oshawa’s offence as of late. They’ve racked up 16 goals in their past three home games.

Ottawa’s offence has also been hot lately. They’ve scored 17 goals in the last four games and have averaged more than 33 shots per game over that stretch. Forward Dante Salituro had his seven-game point streak broken against the Bulldogs last night, but still leads the team with nine points in the month of November.

Defenceman Jake Middleton notched his third goal of the season and added an assist in that game, while winger Trent Mallette also tickled the twine in Hamilton last night. Ottawa will need it’s top guns firing on all cyclinders when face off against the Generals at 6:05 p.m. tonight.