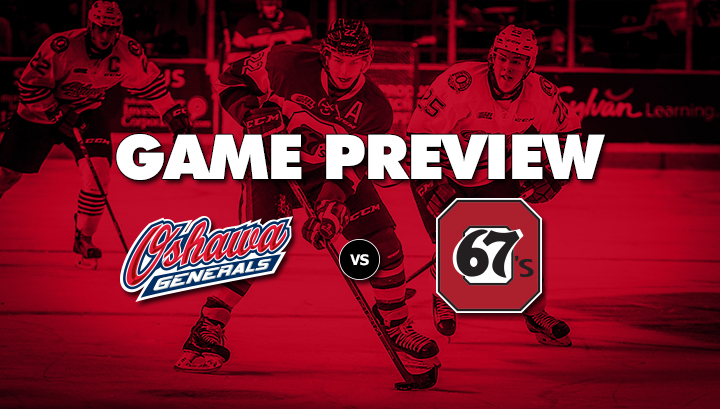 The 67’s head west down Highway 401 for a 6:05 p.m. face off tonight against the Oshawa Generals. This is the seventh meeting of the year for these division rivals, as Ottawa has swept the season series 6-0. Over the six victories the Barber Poles have outscored Oshawa 26-13.

In their last meeting, the 67’s shutout the Gens 3-0 on the back of a stellar performance from goaltender Leo Lazarev. Lazer stopped all 31 shots fired by Oshawa, on the way to his third clean sheet of the season. In the other end, Oshawa netminder Jeremy Brodeur, son of New Jersey Devils legend Martin, looked impressive as well, only allowing two goals on 34 shots.

Leading the way offensively for the 67’s were Nathan Todd, Stepan Falkovsky, and Travis Barron, who all found the back of the net versus Oshawa.

Forward Dante Salituro also picked up an assist in the win. Ottawa leading scorer (30G, 39A) was riding a season-high 13-game point streak, unfortunately that run ended Friday night versus Kingston, though Dante recorded 19 point over that stretch. Look for him to start a new one in Oshawa tonight.

The Gens have gone 1-2 since their 3-0 loss at TD Place, dropping decisions to two of the league’s elite, Barrie and Kitchener. In those past three games, Oshawa has allowed 15 goals and only scored seven.

Their currently two points behind the Hamilton Bulldogs for the last playoff spot in the OHL’s Eastern Conference.

On Friday, February 27, REDBLACKS QB Henry Burris, REC Brad Sinopoli, OL Alex Mateas and head coach Rick Campbell will be attending the 67’s game versus the Sudbury Wolves. Puck drop is scheduled for 7 p.m. Get your #RNation merch ready, as they’ll be signing autographs during the first intermission. As an added bonus, you can have your photo taken with their East Division Championship Trophy.

The excitement doesn’t stop there. Our annual Wiener Dog Race hits the ice at The Arena at TD Place in the second intermission. This fun-filled canine competition is always a 67’s fan favourite, check out last year’s highlights below.