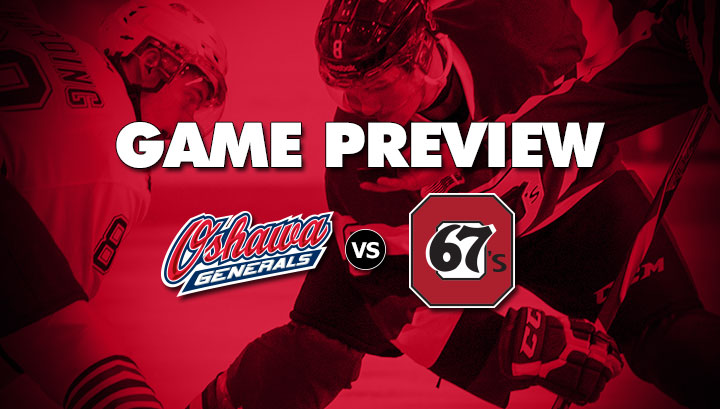 The Barber Poles wrap up their three-game weekend with a trip to Oshawa for a 6:05 p.m. puck drop with the Generals.

Ottawa has had their way with the Gens this year, defeating their East Division rival in four straight match-ups. If the 67’s can claim another victory tonight, they’ll take the season series versus the defending Memorial Champs.

In their last meeting, Ottawa mounted a third period comeback that extended into the shootout where both Nathan Todd and Dante Salituro beat Generals netminder Justin Nichols to seal the 4-3 win. The pair of forwards scored game-tying goals in the final frame to push the contest to extra time.

Salituro has been Ottawa’s offensive leader all season and hit an impressive milestone yesterday afternoon against Owen Sound. The fourth-year forward tallied his 100th and 101st OHL goals in losing effort to the Attack.

Leo Lazarev has picked up two Ws against Oshawa this year, most recently that 4-3 SO victory just over a week ago. He stopped 26 Oshawa shots, including two shootout chances by Robbie Burt and Michael Vande Sompel to steal two points for the Generals.

Oshawa won a critical match 2-1 over the Hamilton Bulldogs. Gens Domenic Commisso and Alexandre Renaud scored in the game, while Nichols earned his first victory since the trade deadline.

The two bottom dwellers of the OHL’s East Division are in a battle for the final playoff spot.

Closer to the top, Ottawa is now tied with Peterborough for second place in the division. The Petes are in tough against Kingston tonight, so if the 67’s can make it five in a row versus Oshawa, they’ll likely sit alone in at number two.

The 67’s Family Day game is set for Monday, February 15 at 2 p.m. against the North Bay Battalion. After the game, all kids are invited to hit the ice with the team and grab autographs from your favourite players. So make sure you come early and stay late.

Tickets are still available by clicking here, calling 613-232-6767 x1, or in person at the TD Place Box Office located beside Gate 3.