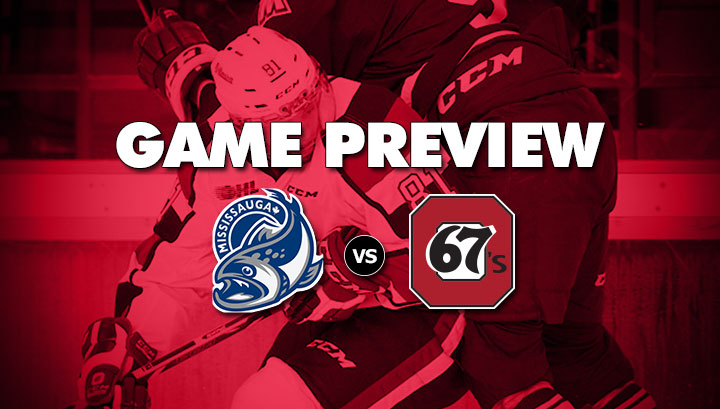 The 67’s are coming off a three-game road trip that saw them play some exciting back-and-forth hockey. Ottawa traveled south to take on the Windsor Spitfires, Flint Firebirds, and Saginaw Spirit.

The Barber Poles claimed two impressive victories over the Spitfires and Spirit, though suffered a rare, lopsided loss to Flint. 67’s goaltender Leo Lazarev and forward Travis Barron were the stars last weekend. Lazarev picked up two victories and improved his record to 4-1-1, while Barron recorded his first OHL hat trick in Saginaw.

The 67’s are back at TD Place tonight to face off against the Mississauga Steelheads at 7 p.m. Great seats are still available here, by calling 613-232-6767, or directly at the TD Place box office.

When these two teams last met, the 67’s were in the midst of a four-game losing streak and Mississauga handed them their worst loss in almost a full calendar year.

Steelheads goaltender Jack Flinn stopped all 29 shots he faced and forwards Josh Burnside and Nick Bastian chipped in with three points each in Mississauga’s 7-0 victory over Ottawa.

Since then though, a lot has changed. After losing in Mississauga, Ottawa has gone on to win six of their next eight games, while the Steelheads have dropped six of their last nine.

The Steelheads lineup is littered with young, up-and-coming prospects. Players like Alexander Nylander, Owen Tippett, and Sean Day should be elite OHL players in the near future, but will this be the season all that youthful talent can find success.