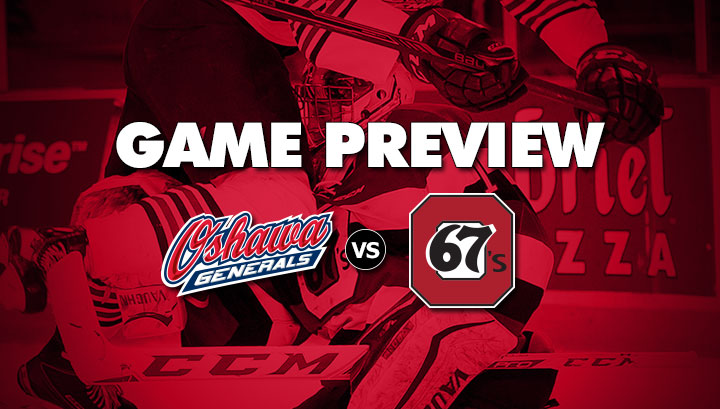 After a seven day break, the Barber Poles are back in action at TD Place tonight at 7 p.m. to take on the defending Memorial Cup Champs, Oshawa Generals. Great seats are available here, by calling 613-232-6767 x1, or visit the TD Place box office.

The Generals may be feeling somewhat of a championship hangover, as they’ve started the season 3-2-1. The team lost some very notable players in the off-season, Michael McCarron (MTL), Cole Cassels (VAN), and Tobias Lindberg (OTT) have all moved on to the next step in their career. The three former Gens will start the 2015/16 season with the American Hockey League affiliate of the NHL club that dratfed them.

Oshawa’s leading scorer last year, Michael Dal Colle is back though, and he’s hoping to improve on his outstanding 2014/15 season. He tallied 93 points in only 56 games. Look for Dal Colle to play with a chip on his shoulder, as he was one of the final cuts from the New York Islanders traing camp.

The Generals roster has been bolstered by a crop of young forwards. Brother of 67’s centre Sam Studnicka, Jack Studnicka should be ready to contribute this season. He was Oshawa’s first round pick in this year’s OHL Priority Selection. Tonight’s game marks the first time the brothers will face-off against each other in an OHL game.

The 67’s are coming off a 5-goal outburst that saw them record their first victory of the new season. They’ll be looking to carry that momentum into tonight’s game against this tough opponent. Last year, the 67’s were overpowered by the veteran Generals squad, losing 5 of 6 games against Oshawa. After losing 10 players to over-age status, the Generals will be a completely different team this year and that should give Ottawa the advantage.

You’ll see that some 67’s players have pink tape on their sticks or pink laces in the skates at Friday’s game. They’re supporting the fight against women’s cancers and hoping to raise awareness.

You can help too! Support the battle by visiting a Cancer Society kiosk on the concourse.

Remember, all Ottawa/Gatineau minor hockey players can their free 67’s tickets at 67sprospects.com.