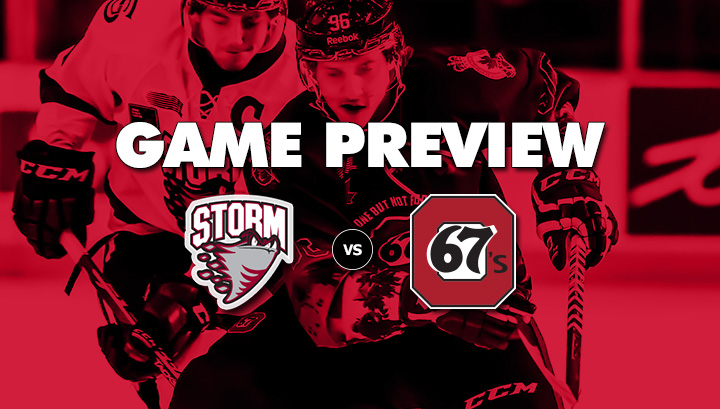 Ottawa is coming off their first home win in almost month and spending three weeks away from TD Place.

They squashed the Sarnia Sting 4-1 on Friday night, a game that saw Sam Studnicka and Travis Konecny recorded a goal and an assist, while Jeremiah Addison had two assists on the night.

Netminder Leo Lazarev made some dazzling saves on the way to his tenth win of the season. His stellar play against the Sting also lowered his GAA to 2.52 and raised his SV% to .913, together vaulting him into the top five ‘tenders in the OHL.

The victory makes it three in a row for the 67’s, who will look to weather the Storm today at TD Place, as they host Guelph in a 1 p.m. matchup. Great seats are still available here.

The Storm have been blown out this season and currently sit dead last in the OHL standings. They have an abysmal record of 2-20-1 and have only secured five points this season. The second worst team in the league, Sudbury, has more than double the wins (5) and points (13).

Guelph’s struggles can be directly linked to their lack of offence. The team has only scored 40 goals combined, 20 less than the next lowest, the Owen Sound Attack. The Storm don’t have one player in the top 100 of OHL scoring. Leading the way is third-year forwards Tyler Boston with 13 points.

Former 67 Tyler Hill, who was traded to Guelph last season, may not be in the lineup. The towering forward suffered a concussion recently and has sidelined ever since.

The Storm defence has been just as horrible though, giving up the third-highest goals (102). An unreal 15 players on their roster sport a minus 10 or worse.

Though this may seem like an easy win for the Barber Poles, but this game presents a great test for them. If they can dominate offensively and play with structure in their own end, the Storm may be in for a dog day afternoon.

The 67’s will be accepting donations of coats, hats, mitts/gloves, and scarves to benefit The Snowsuit Fund at Saturday’s game.

Donate a piece of warm clothing and you’ll receive a voucher for any 67’s game in December!