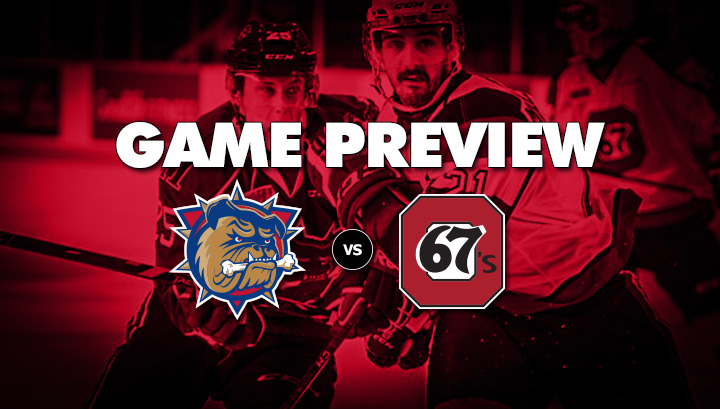 Ottawa kicks off February with a Friday night match-up against the bottom dwelling Bulldogs at 7 p.m. Sweet seats are available by clicking here, calling 613-232-6767 x1, or in person at the TD Place Box Office.

An arduous month of January that saw the 67’s play 13 games, including a trio of three-games-in-three-nights, is finally in the rearview mirror. Multiple injuries and a major trade may have slowed some teams, but Ottawa showed resilience and ended the month 7-6.

It seems as though the Barber Poles will get some energy back in their lineup tonight. Forward Travis Barron was in full gear at yesterday’s practice and may suit up for the 67’s versus Hamilton.

With only 19 games left in the OHL season, Ottawa looks to be assured a post-season spot. They currently sit two points back of Peterborough for second place in the East Division. If the 67’s can scold the Bulldogs tonight, they’ll move into a tie with the Petes before they face off against one another tomorrow night.

Those Petes defeated Hamilton 4-1 last night in Peterborough. Forward Trent Fox scored the loan goal for the Dogs, his team-leading 21st of the season. Hamilton’s backup goalie Kaden Fulcher was handed the loss, as he allowed four goals on 35 shots.

With the Bulldogs currently sitting in the basement of the East Division, they are in a battle with the Oshawa Generals for the final playoff spot in the OHL’s Eastern Conference. In all sincerity, it seems neither club would mind missing the cut and receiving a higher pick in this summer’s Priority Selection.

With that being said though, look for the Dogs to keep barking tonight, as many young players on their roster will be battling for next season’s ice time.

You can take advantage of free OC Transpo bus service for Ottawa 67’s games! Your ticket provides you with free transit on any OC Transpo bus starting 3-hours before the game, and up to 3-hours after the game! For more information on transit service to TD Place, please visit the OC Transpo website.

Pre-purchasing your parking pass is HIGHLY encouraged, as the garage may sell out. Pre-purchased game day parking passes reserve your spot and are available by clicking here.

Fans who purchased seats for the November 8 game versus the North Bay Battalion can use their original tickets to access The Arena at TD Place on Tuesday, February 9 at 7 p.m. There is no need to reprint your tickets, as your barcode will be reactivated for next week’s game.

The 67’s Family Day game is set for Monday, February 15 at 2 p.m. against the North Bay Battalion. After the game, all kids are invited to hit the ice with the team and grab autographs from your favourite players. So make sure you come early and stay late.

Tickets are still available by clicking here, calling 613-232-6767 x1, or in person at the TD Place Box Office located beside Gate 3.