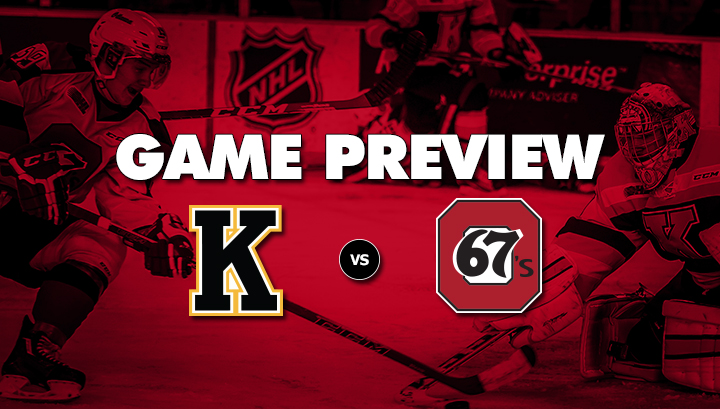 Friday night OHL action returns to The Arena at TD Place at 7 p.m. tonight, as the 67’s look to take down the East Division leading Kingston Frontenacs. Sit on the glass for only $17! Great seats are available for tonight’s game by clicking here, calling 613-232-6767 x1, or in person at the TD Place Box Office.

Not far behind are Artur Tyanulin and Evan de Haan, both of whom have recorded four points against the Fronts this season.

Netminder Leo Lazarev has picked up all three victories versus Kingston, only allowing five goals on 81 shots in the trio of contests. Look for him to get the nod tonight, as he’s been playing extremely well lately.

Leo was named Vaughn CHL Goaltender of the Week for the week ending February 14 after posting a 2-0-0-0 record including a shutout victory with a goals against average of 0.50 and save percentage of .983.

He played a huge role in the 67’s latest victory over Kingston on December 29, check out the highlights below.

Though the 67’s have found success versus Kingston in the past, the Frontenacs have evolved into an elite OHL team since these clubs last met. The Fronts added four players via trade this season, two of which suited up in last season’s Memorial Cup with the Oshawa Generals.

Both Stephen Desrocher and Michael Dal Colle were key part of the Gens championship run and together bring that mentality to a surging Frontenacs.

Dal Colle has been all-world since arriving in Kingston. In 30 games with the Generals, he struggled to find consistency, scoring only eight goals and adding 17 assists.

Now with 18 games under his belt with the Fronts, he’s doubled his assist total (34) and buried 20 more goals as well, vaulting him into the OHL’s top 20 scorers. Dal Colle, like the 67’s Salituro, is also riding an impressive point streak, as he’s recorded at least one in his last 12 games played. He’ll be a major focus for Ottawa’s defence tonight at TD Place.

If the 67’s can defeat the Fronts and collect two points, they’ll jump over the Niagara IceDogs, who are in town tomorrow afternoon, and take over the last home-ice advantage playoff spot.

You can take advantage of free OC Transpo bus service for Ottawa 67’s games! Your ticket provides you with free transit on any OC Transpo bus starting 3-hours before the game, and up to 3-hours after the game! For more information on transit service to TD Place, please visit the OC Transpo website.

Pre-purchasing your parking pass is HIGHLY encouraged, as the garage may sell out. Pre-purchased game day parking passes reserve your spot and are available by clicking here.

On Friday, February 27, REDBLACKS QB Henry Burris, REC Brad Sinopoli, OL Alex Mateas and head coach Rick Campbell will be attending the 67’s game versus the Sudbury Wolves. Puck drop is scheduled for 7 p.m. Get your #RNation merch ready, as they’ll be signing autographs during the first intermission. As an added bonus, you can have your photo taken with their East Division Championship Trophy.

The excitement doesn’t stop there. Our annual Wiener Dog Race hits the ice at The Arena at TD Place in the second intermission. This fun-filled canine competition is always a 67’s fan favourite, check out last year’s highlights below.