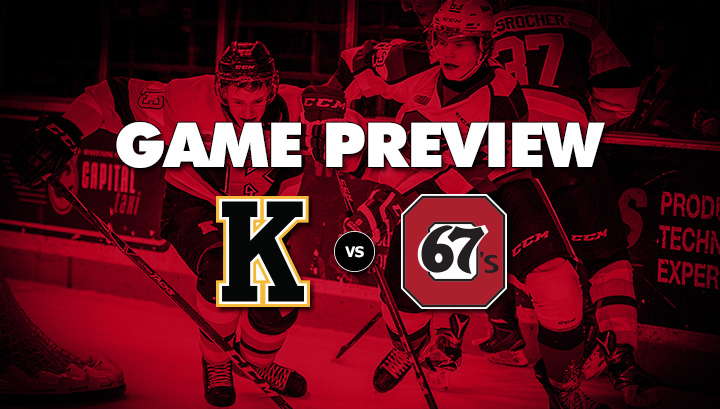 After snapping a six-game winless streak, Ottawa looks to finish 2015 off strong as they face the Frontenacs in their final game before the holiday break at 1 p.m. today at The Arena at TD Place. Great seats are still available here, by calling 613-232-6767 x1, or directly from the TD Place Box Office.

Kingston sits eight points up on Ottawa for the lead in the East and a 67’s win today could go a long way in the fight for divisional supremacy.

The Barber Poles pulled off a 5-4 victory against the Petes last nightat The Arena at TD Place, their first W in two weeks.

It took a strong team effort to secure the victory, as 10 67’s chipped in with at least a point.

Defenceman Evan de Haan was the contests’ number one star. The Ottawa-native scored his fourth and fifth goals of the season, while also adding an assist on Travis Barron’s ninth of the year.

This was Ottawa’s first match without both leading scorer and captain Travis Konecny and top defenceman, Stepan Falkovsky. Both are away at the 2016 IIHF World Junior Championships in Finland.

The Frontenacs, themselves, have three players representing their home nations at the World Juniors over the holidays. Canadians Lawson Crouse and Roland McKeown, as well as Finnish-born forward Juho Lammikko will suit up for the tournament.

As Team Canada’s roster is still not set in stone, there is a chance Crouse and/or McKeown could be sent home. The odds of Crouse being released are far less though, as he is one of only a few returning players from last year’s gold-medal winning team.

Kingston has not faired well without their elite three, falling to Hamilton and Erie, while only defeating the Soo Greyhounds since the trio left for Finland.

One of the Fronts making the most of the extra playing time though is rookie Jason Robertson. In December so far, the California-native is averaging two points per game and now boasts 14 goals and eight assists in 25 contests with Kingston.

The 67’s will hope to end Robertson’s streak and pick up two huge points against the division rival Frontenacs.

*Please be advised, on December 19 expect the parking garage to be extremely busy as Cineplex Cinemas Lansdowne and VIP has an out-of-this-world adventure premiering this weekend.

The Barber Poles will take a deserved two-week holiday break and don’t return to The Arena at TD Place until Friday, January 8 at 7 p.m. for a matchup against the Fontenacs and Saturday, January 9 at 1 p.m. versus the Mississauga Steelheads.