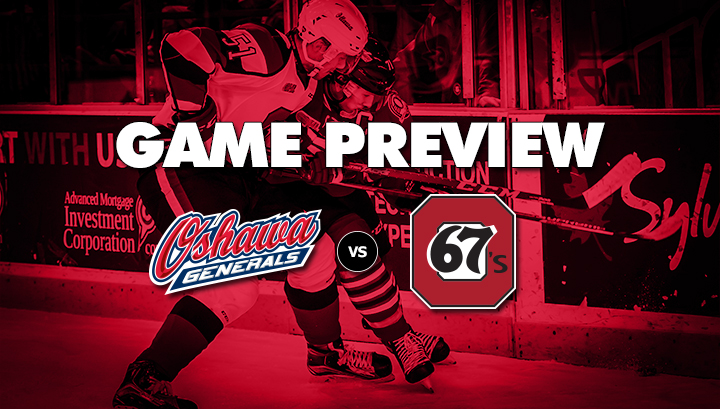 Ottawa opens their only two-game weekend of January with a matchup versus the Oshawa Generals at 7 p.m. tonight in The Arena at TD Place. Tickets are available by clicking here, calling 613-232-6767 x1, or in person at the TD Place Box Office.

After winning it all last year, the Gens have all but given up on repeating the feat this season. They sent their captain, Michael Dal Colle, to Kingston at the trade deadline, the final move of many that saw Oshawa ship key pieces of their 2015 Memorial Cup winning roster out of town.

The Generals have felt the absence of those players lately, as they’re currently stuck in a five game losing streak. During that time, Oshawa has dropped two games to both Windsor and Saginaw, while starting the skid with a 5-2 loss the Eastern Conference leading Frontenacs.

Neither the Gens’ offence nor defence has seemed to be able to get it together, as they’ve been outscored 21-8 in those five defeats.

These teams haven’t met since November 22 when Ottawa trounced the Generals 6-2 in Oshawa. In that game, 67’s forward Dante Salituro recorded his second hat trick of the season (he now has three), while also adding an assist.

Though the complexion of both lineups has changed significantly since then, Salituro still remains one of Ottawa’s most offensively explosive players. The fourth year forward is extremely hot at the moment, racking up eight points in his last four contests. His 55 points leads the 67’s and has him sitting 10th among all OHL scorers.

Another bright spot for the 67’s recently has been their duo of netminders. Leo Lazarev and Liam Herbst have each recorded a victory in Ottawa’s current two-game winning streak.

For Herbst, it was his first W since November 13 against the IceDogs. He stopped 23 of 25 shots fired by the Petes, on the way to a 5-2 win over the team’s close division rival on Saturday night.

Lazarev was stellar on Sunday afternoon, securing his 16th win of the season versus Flint. The 67’s unofficial starter only allowed one goal while facing 31 Firebird attempts. He’s putting together a sublime stat sheet in January, posting a 2.03 GAA and a .932 save percentage through five games this month.

He’ll need to continue that impressive play if the 67’s hope to make it three straight against Oshawa tonight.

The 67’s #IHeartHockey game is set for Sunday, January 24 at 3 p.m. against the Saginaw Spirit. The first 2,000 fans in The Arena at TD Place will receive free swag. We are giving away 67’s toques and I Heart Hockey cups. So make sure you come early!

Great seats are still available by clicking here, calling 613-232-6767 x1, or in person at the TD Place Box Office located beside Gate 3.