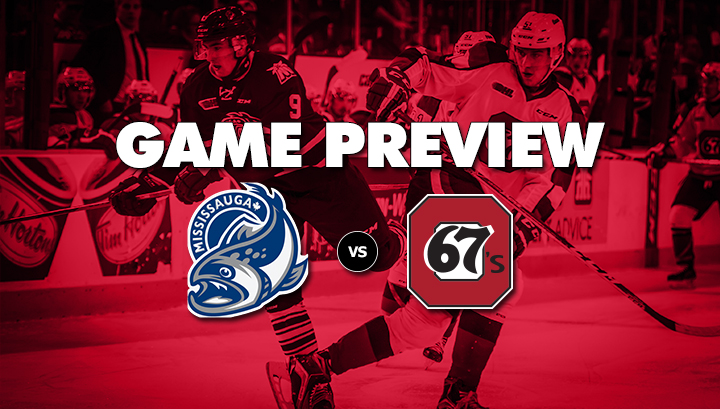 Ottawa looks to make it back-to-back victories, as they host the Steelheads at 1 p.m. today at The Arena at TD Place. Tickets are available by clicking here, calling 613-232-6767 x1, or in person at the TD Place Box Office.

The 67’s snapped out of a three-game skid last night, defeating the Peterborough Petes 3-2 for the first victory of 2016.

Newly acquired Sasha Chmelevski scored his first as a Barber Pole on a sublime snap shot from just outside the face-off circle. The goal kept his current point-streak alive, now sitting at four games.

GM/head coach Jeff Brown showed great confidence in the rookie, starting him on the team’s top line with Dante Salituro and, fellow first-year forward, Austen Keating. Post-game, Brown offered this comment on Sasha’s game, “I didn’t know he was THAT good … he was special tonight.”

Chmelevski also saw an abundance of time on the 67’s power play, where he even saw time quarterbacking the first unit. His game was solid overall, as he registered a team-high eight shots, finished the game with a plus-1 rating, and went 6/11 on face-offs.

Sasha and his 67’s teammates will be in for another tough test, as they quickly get back at it against the Steelheads today.

In their past 10 contests, Mississauga has leveled off, posting a .500 record of 4-4-1-1. The absence of their star rookie Alex Nylander may have caused some of that inconsistency, as he was competing in the World Juniors tournament.

The outstanding Swede leads all OHL rookies with 49 points in 33 games. Max Jones of the London Knights sits second in that category, though only has 34 points in the same number of games.

To be fair Nylander was born in 1998 and will most definitely be a top pick in this year’s NHL Draft.

Though Nylander is just one of a few top draft eligible players Mississauga boasts on their roster. Defenceman Sean Day, along with forwards Nick Bastian and Michael McLeod will join Nylander at the 2016 BMO CHL/NHL Top Prospects Game in Vancouver, BC, on January 28.

This will be the second meeting in less than a week between the two clubs. Ottawa dropped a 2-0 decision to the Fish last Sunday afternoon in Mississauga.

Steelheads forward Josh Burnside picked up his sixth point against Ottawa this season in that game. Michael McLeod was held of the score sheet, but has five points in three games versus the 67’s this season as well.

The 67’s #IHeartHockey game is set for Sunday, January 24 at 3 p.m. against the Saginaw Spirit. The first 2,000 fans in The Arena at TD Place will receive free swag. We are giving away 67’s toques and I Heart Hockey cups. So make sure you come early!

Great seats are still available by clicking here, calling 613-232-6767 x1, or in person at the TD Place Box Office located beside Gate 3.