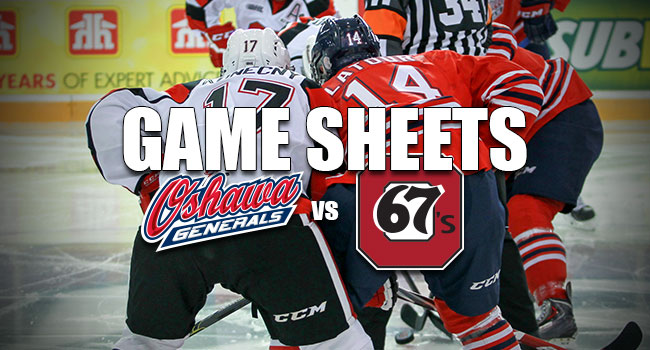 The 67’s put their 4-game winning streak on the line tonight against the top team in the OHL.  Oshawa comes to TD Place riding a 5-game winning streak of its own so we should be in for a close battle. Tonight’s game kicks-off a busy stretch for the 67’s. They host Sarnia on Friday, visit Peterborough on Saturday and return home Sunday for the sold-out matchup against Conner McDavid and his Erie Otters. If you have tickets for that game but no onsite parking pass consider riding OC Transpo for free from anywhere in the city by showing your game ticket.  It’s a ticket to ride for free!  You can also park at Carleton University for $3.00 on Sunday and hop on a #7 bus right to TD Place.

Last week, the 67’s beat Belleville 2-0 at home on Friday to move within 3 points of North Bay and 3rd place in the Eastern Conference standings. Leo Lazarev earned his 2nd shutout of the season stopping all 23 Belleville shots. Alex Lintuniemi and Curtis Meighan each scored their 4th goals of the season. Jeremiah Addison assisted on both goals.  Captain Travis Konecny missed that game serving the second and final game of a suspension for a slew foot penalty.

The top-ranked team in the country will bring their 33-7-1-1 record to TD Place tonight. The Generals have 3 of the top scorers in the league in Michael Dal Colle, Tobias Lindberg and Cole Cassels. They also boast Mitchell Vande Sompel and Chris Carlisle who rank top ten in D-man scoring.  And behind them, Ken Appleby leads all OHL goaltenders with a .923 save percentage and a 29-5-0-1 record. Oshawa is ranked 3rd on the power play and have the best penalty kill in the OHL.

The reason this game is on a Tuesday night is that it’s a make-up match-up for a game scheduled Nov. 7.  A problem with the ice making infrastructure caused the ice to melt wiping out that game and one other while repairs were made.  Tickets with Nov. 7 on them are still valid for this game.

Time is running out on your chance to purchase a 67’s autographed, game-worn jersey in support of DoefStrong.  For details follow this link.