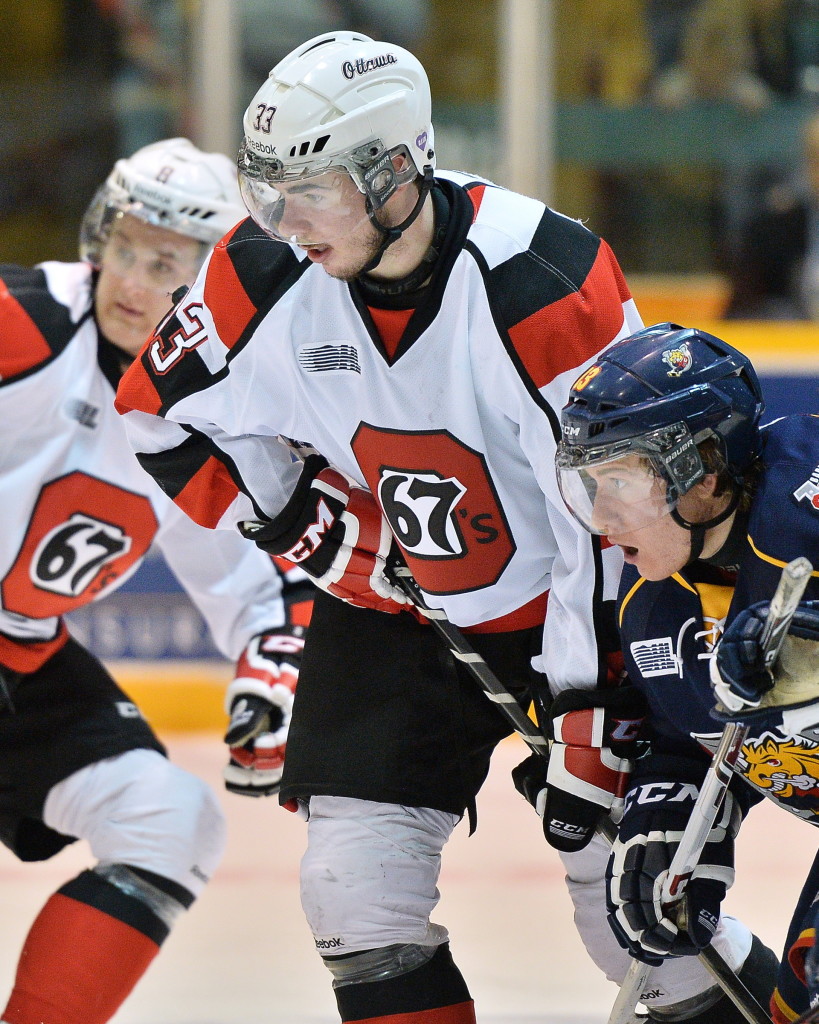 Ottawa – It was anyone’s best guess how much ice time 67’s centre Erik Bradford would get in his first regular season game since breaking his femur at the end of last season.

Coach Jeff Brown said prior to the season-opening loss to Kingston that he might limit Bradford’s playing time early, maybe use him just on the powerplay.

But Bradford wound up taking a regular shift and looked stronger than expected in his return from the serious injury, which left him wondering early on if he’d make it back to the 67’s lineup.

“Not too bad at all for a guy who hadn’t played for a long time,” was Brown’s assessment of Bradford’s first game. “He wasn’t going to let me sit him on the bench. He has a competitive spirit so he played and played a lot.”

While Bradford admits to still being bothered by lingering effects from the femur fracture, he was happy to be back in a game and said he felt good.

“It was good to be out there with the guys competing and battling,” he said.

Bradford said he left it up to his coach to decide how much he played.

With three games in three days – Friday in Oshawa, Saturday in Barrie and Sunday in Owen Sound – Brown said it will be important to manage the ice time of all of his players to keep everyone as fresh as possible.

“Last Friday, we were able to play (guys) a little bit more knowing we didn’t have to come back (and play the next day),” Brown said. “We’re going to have to share the ice time a little bit but when we have an opportunity to win, we’re going to play our guns.”

Though he gave rookie goaltender Leo Lazarev the start last weekend in Kingston, Brown will use both goalies this weekend.

“We’re fortunate that we’ve got two goalies that are going to keep us in most games,” he said.