Konecny Excited Ahead of NHL Draft 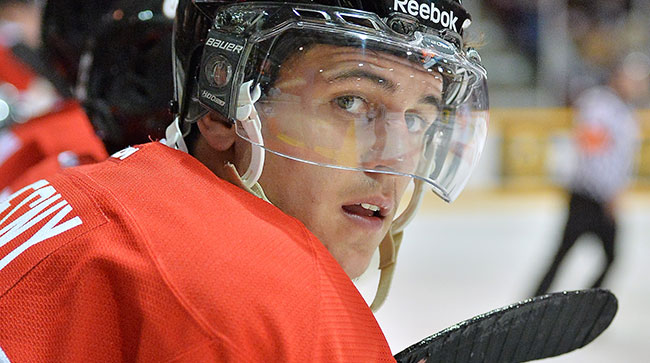 Fort Lauderdale, FL– With the NHL Draft almost here, Ottawa 67’s Captain and top draft prospect Travis Konecny is excited about what the future holds. Travis, who has family here in Florida for the Draft, is looking forward to the NHL Draft and taking the next step in his hockey career.

Konecny has always been a leader, going back to leading the Elgin-Middlesex Chiefs, U-18 Team Canada and currently the Ottawa 67’s. He attributes this to the way he was brought up, “my parents always taught me to be a leader, not a follower and I took that to heart when I was a kid, its in my nature to work hard and get everyone to buy in. When I was named captain of the Ottawa 67’s, I didn’t change anything, I just kept working hard and this has helped me be a leader.”

This past year, Travis says he has learned a lot from his head coach Jeff Brown. “He taught me how to be a professional in all aspects of the game, he was an all around a great coach to have in my draft year.”

Looking ahead to the Draft, Travis doesn’t have a preference to what NHL Team drafts him, saying “there is no preference, it’s the NHL, they all play hard, I’m just looking forward to getting my shot at the NHL.”