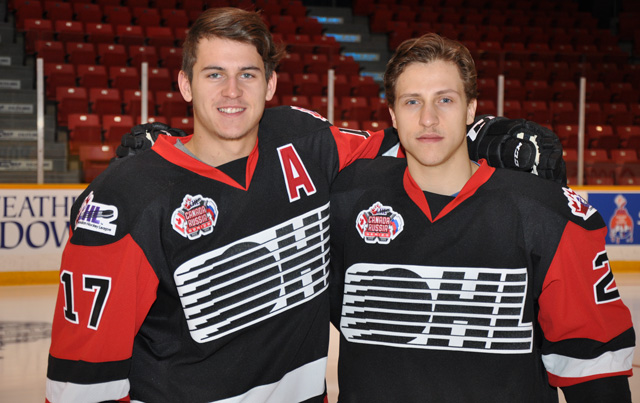 Tonight in Owen Sound, Team OHL will take on Team Russia in Game 3 of the 2015 CHL Canada Russia Series.

Two 67’s forwards, Dante Salituro and Travis Konecny, will be a part of the action. Konecny has been named to Team OHL’s leadership group, as he will wear in ‘A’ against the Russians tonight.

Konecny has experience in this type of all-star game format, as he suited up for Team OHL last year. For Salituro though, this will be his first taste of the CHL Canada Russia Series. This also marks the first time duo has played together outside of their time with the Ottawa 67’s.

Travis is looking forward to sharing the experience with his teammate and knows Salituro is deserved of the chance.

“It’s an honour,” explained Konecny in a recent post game interview. ” And I’m also really proud of Salituro on our team, he was named and it’s big for him. I look forward to playing with him in the game.”

The pair of highly skilled speedsters should fit nicely on a Team OHL squad that will be captained by Frontenacs forward Lawson Crouse. The other alternate captains are Kingston defenceman Roland McKeown who will suit up in both games of the series, Michael Dal Colle of the Oshawa Generals who take Konecny’s ‘A’ in Game 4 in Windsor.

The CHL currently leads the 2015 edition of the Canada Russia Series 6-0 in points following a pair of victories by Team WHL in Kelowna and Kamloops, BC.  In 12 years of competition against the Russian National Junior Team the OHL carries a record of 20-3-1 including a 4-0 loss in Peterborough and a 5-1 win in Kingston last season.

Team OHL will rematch Team Russia in Windsor on Monday, November 16 at 7 p.m.

The schedule for the 2015 CHL Canada Russia Series is as follows:

SHIRLEY SETS NEW WHL RECORD: Kamloops Blazers forward Collin Shirley, who was added to the series as an injury replacement, has set a new WHL CHL Canada Russia Series record with five points in two games. The 19 year-old had a goal and three assists in Monday’s 7-3 Game 1 victory before adding an assist in a 4-2 win in Game 2 on Tuesday.

SENYSHYN SIGNS WITH BRUINS: Sault Ste. Marie Greyhounds forward Zach Senyshyn signed an entry-level NHL contract with the Boston Bruins on Wednesday. The Ottawa, ON, native was Boston’s first round, 15th overall pick in the 2015 NHL Draft. Senyshyn has 10 goals, four assists and 14 points in his 18 games this season.

MANGIAPANE, RADDYSH ENTER ACTION ON POINT STREAKS: Barrie Colts forward Andrew Mangiapane enters action tonight with points in each of his past nine OHL contests. The Calgary Flames prospect leads the Colts in scoring this season with 12 goals, 13 assists and 25 points in 17 games. Erie Otters 17 year-old forward Taylor Raddysh is currently on a six-game trend that has netted a goal, twelve assists and 13 points over that span.

STEPHENS, BRATINA SIDELINED: Forwards Mitchell Stephens (Saginaw Spirit) and Zach Bratina (North Bay Battalion) were originally named to Team OHL’s roster for the series, but both have suffered injuries and won’t be in the lineup. Stephens nears a return, but Bratina has recently announced his retirement at the young age of 20 due to concussion-related issues. He was off to a hot start to the season with 12 goals, three assists and 15 points in 12 contests.

THREE OHL DEFENCEMEN SLOT INTO LINEUP: After a pair of losses against the WHL, Russia receives reinforcements on the back end tonight as OHL blueliners Damir Sharipzyanov (Owen Sound Attack), Dmitrii Sergeev (Kitchener Rangers) and Aleksandar Mikulovich (Niagara IceDogs) are added to the lineup.

VOVCHENKO RECENT KHL ROOKIE OF THE WEEK: Russian forward Daniil Vovchenko was named the KHL Rookie of the Week on November 3rd. The Cherepovets forward had two goals and an assist in three games and has three goals, three assists and six points in 11 contests this season.

DIRE STRAITS: Russia hasn’t managed to recover from a 6-0 point deficit in the history of the CHL Canada Russia Series. They’ve defeated Team OHL in three of their past four meetings.

For more information including how to purchase tickets please visit http://canadarussia.chl.ca.