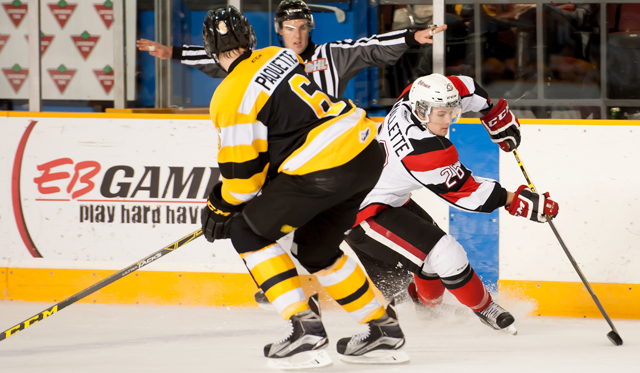 In their return to The Arena at TD Place, the 67’s were unable to comeback and fell to the Kingston Frontenacs 4-3.

The game was locked at 1-1 after the first 40 minutes, however, Kingston scored two consecutive to push their lead to 3-1 midway through the third.

The Barber Poles cut into that lead with a goal by Trent Mallette, his eighth of the season, late in the final period, however the comeback rally wasn’t enough to tie the game.

Wednesday’s contest also saw a fight between Kingston’s Lawson Crouse and Ottawa’s Jacob Middleton in the last few minutes of the second frame.

The 67’s will also face the No. 1-ranked Erie Otters on Friday, December 11 (7 p.m.) and the Sault Ste. Marie Greyhounds on Sunday, December 13 in the team’s annual Holiday Game, which will include the popular and spectacular Teddy Bear Toss, along with a Sing for Santa feature and autographs with the players after the game.

(at the Arena at TD Place)