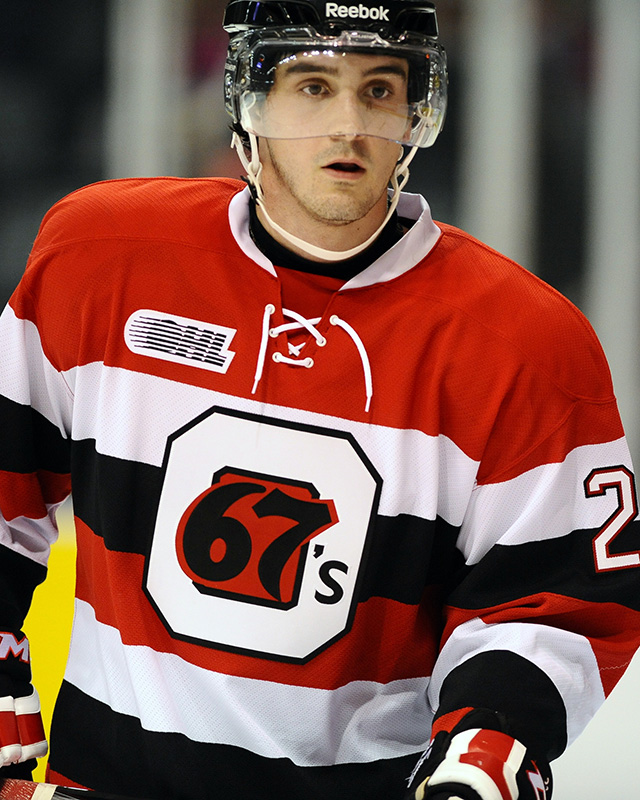 Ottawa 67’s defenseman Jacob Middleton might be a few years away from beginning his professional hockey career, but he has a good idea on what it might take to reach the highest level.

“You have to be the strongest guy on the ice both physically and mentally,” Middleton said. “When you have guys like Sidney Crosby coming down on you, you must be mentally prepared for what’s to come and physically prepared to take on someone of his ability.”

“I’m a physical defenseman and pretty aggressive,” he said. “I’m a defensive-defenseman, but I was given opportunities on the power play in Ottawa as well because we were a younger team. I was able to showcase some skills up there, but as a pro, I think I’ll be a stay-at-home guy.”

Middleton had nothing to lose and everything to gain as a participant at the 2014 NHL Scouting Combine in Toronto last month. Ranked No. 172 on NHL Central Scouting’s final list of the top North American skaters eligible for the 2014 NHL Draft at Wells Fargo Center in Philadelphia on June 27-28, he was the lowest-rated player of the 119 prospects invited to the event.

Despite that fact, his spirits were at an all-time high.

“Knowing where I stand in the rankings, the Combine gave me an opportunity to talk to teams and have those clubs get to know me, because from the sounds of it, a couple teams wanted to meet with me which is an honor,” Middleton said.

“There were high expectations for [Middleton] going into the season, and he struggled out of the gate yet finished really strong down the stretch,” Marr said. “As with most young defensemen, he’s finding his way to understand that doing less can accomplish more. Where he’s been able to differentiate himself is that he knows when to step up when it’s needed most, which could mean simplifying his game to defend a lead, skating the puck into the offensive zone or initiating more physical play to motivate his team.”

Middleton had two goals, 23 points and 64 penalty minutes in 65 games in his second season with Ottawa in 2013-14. He had 11 interviews scheduled with NHL teams at the Combine and fared well in the fitness portion. He scored among the top 15 in hand-eye coordination and placed seventh with 15 repetitions on the 150-pound bench press.

He was grateful for the experience and is now gearing up for the draft.

“The Combine was fun, it was exciting,” Middleton said. “The whole experience was great and the testing was a whole other learning experience in itself. Having eyes watching over you while you do those exercises and the bike tests are something else, but I got to experience it and thankfully it’s over with.”

Middleton earned headlines in January as well when he was an injury replacement for Saskatoon Blades defenseman Nelson Nogier, No. 93 on Central Scouting’s final ranking, at the 2014 CHL/NHL Top Prospects Games in Calgary. He didn’t record a point for Team Cherry in a 4-3 loss to Team Orr, but did fight defenseman Aaron Haydon of the Niagara IceDogs in a pretty intense first-period tussle.

“Jacob was used in all situations with the 67’s this season,” Central Scouting’s Chris Edwards said. “He logged a lot of ice and gained a lot of experience. At times this season he showed some toughness and ability to win battles along the boards. He has shown improvement in all areas of his game.”

“It was a different experience for me to be traded,” Middleton said. “I was 16 years old and in the league for only half the season and I didn’t really know what to expect, but it all worked out. It was a good experience and now I know what happens in a trade. It gave me another asset and I feel I can handle that type of thing a little bit better if it ever happened again.”