MONAHAN STILL GETTING USED TO LIFE AS A CELEBRITY 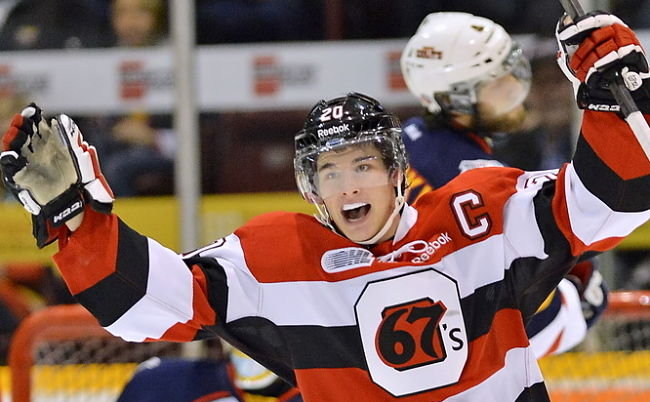 CALGARY – He’s received several marriage proposals, a parody Twitter account about him has nearly 13,000 followers and his No. 23 is one of the top selling Flames jerseys.

Welcome inside the world of NHL rookie-of-the-year candidate Sean Monahan, third-line centre going on face of the franchise, who four months into his NHL career leads Calgary with 15 goals.

Not bad for a teenager living with his mother.

“It’s gone pretty well. Obviously it’s a lot different than coming from junior hockey and that atmosphere. Being a pro is a big responsibility,” said Monahan, the Flames’ sixth overall choice in the 2013 entry draft.

His first milestone was playing his 10th NHL game. Six goals in his first nine games made the decision to keep him in the NHL rather than return him to junior an easy one.

But it came with the condition that he not live on his own. So after spending the beginning of the season with teammate Jiri Hudler and his family, Monahan had a change of address.

The team had former Flames centre and current Calgary Hitmen assistant coach Joel Otto lined up to be his billet when instead Monahan’s mom decided to move out to Calgary.

“It’s awesome. I’m pretty tight with my family so having my mom here, it’s easy for me. Coming home to meals cooked by her is a nice treat,” Monahan said.

With his thick jet black hair, recognizable face, and imposing six-foot-two build, Monahan has already adapted to being recognized everywhere he goes.

“There’s a lot of passionate fans here. When I’m at the mall, I’ll stop by and take a few pictures with some fans. That’s all part of it. It’s fun and something I enjoy,” he says.

Then there is that growing volume of Monahan jerseys out there as slowly, the sea of Iginla No. 12 jerseys that have been so prevalent finally begins to subside.

“Honestly, it’s an awesome feeling to see your name while you’re out walking around the streets,” says Monahan. “It’s pretty special for someone to go out and buy that jersey and I’m just trying to make them proud.”

With fame always comes a bit of the unusual. The most recent of what Monahan estimates has been five or six marriage proposals came up a few weeks ago at an autograph signing.

“A girl came up and said that her Dad had given her the privilege to marry me so she asked me,” says Monahan, with a chuckle. “She was pretty shy about it so it was a pretty awkward experience.”

Then there’s the Boring Sean Monahan Twitter account, which he found out about through teammates Chris Butler and Derek Smith.

“They told me about it a couple months ago so I checked it out and gave it a follow,” says Monahan, who at around 15,000 Twitter followers, is on the verge of being passed in popularity by his parody account. “It’s pretty funny. Some of the tweets are pretty good.”

One player that can relate to his situation is Matt Stajan, who was 19 when he began his rookie season with Toronto in 2003-04. While there are some parallels with Stajan, who also lived at home with his parents during his rookie year, there are big differences also.

Unlike Monahan, Stajan was behind a veteran group of centres on the Leafs, including Joe Nieuwendyk, Mats Sundin, Robert Reichel and Ron Francis, none of whom were younger than 32.

This year in Calgary, Stajan at age 30 is the oldest at that position.

“I came into a completely different situation. Toronto was a really good team with a lot of Hall of Famers so I was eased in,” Stajan said. “We’re in a rebuild and Mony’s getting thrown into all situations right off the bat.”

“Skill-wise, he’s gifted,” said Hartley. “He has the nose to find the open areas. He always comes in at the right time. He uses his big size well and he is learning the game because he’s a great student who is committed to learning and becoming a pro.”

Hartley coached a very good Colorado team for five seasons, winning the Stanley Cup with the Avalanche in 2001. He says Monahan reminds him of a few players.

“He’s a different player than Joe Sakic but his mindset, and Chris Drury and Alex Tanguay are two others I had as rookies. They were all very similar in that they’re very skilled, very offensive minded and they were willing to learn the game in the three zones. Those three guys did not cheat the game and neither is Mony, who wants to play it the right way.”

In a season chockfull of great moments to pick from — a game-winning goal, three shootout-deciding goals, and most recently, assists on the overtime goal in two of the last three games, Monahan shrugs them all off when asked to identify his personal highlight.

“It would be this winning streak right now,” said Monahan, referring to the Flames’ five-game streak they will take to Montreal on Tuesday. “For me, it’s not goals or stuff like that I remember, it’s more so those big wins.”

As for any rookie of the year chatter, of which Calgary hasn’t had since Gary Suter, Nieuwendyk and Sergei Makarov won the Calder during a five-year-span over two decades ago, Monahan reverts to the type of boring response that fuelled the start of his parody account.

“I’ve just been trying to work hard and improve every day and that’s basically my goal this year,” he said.