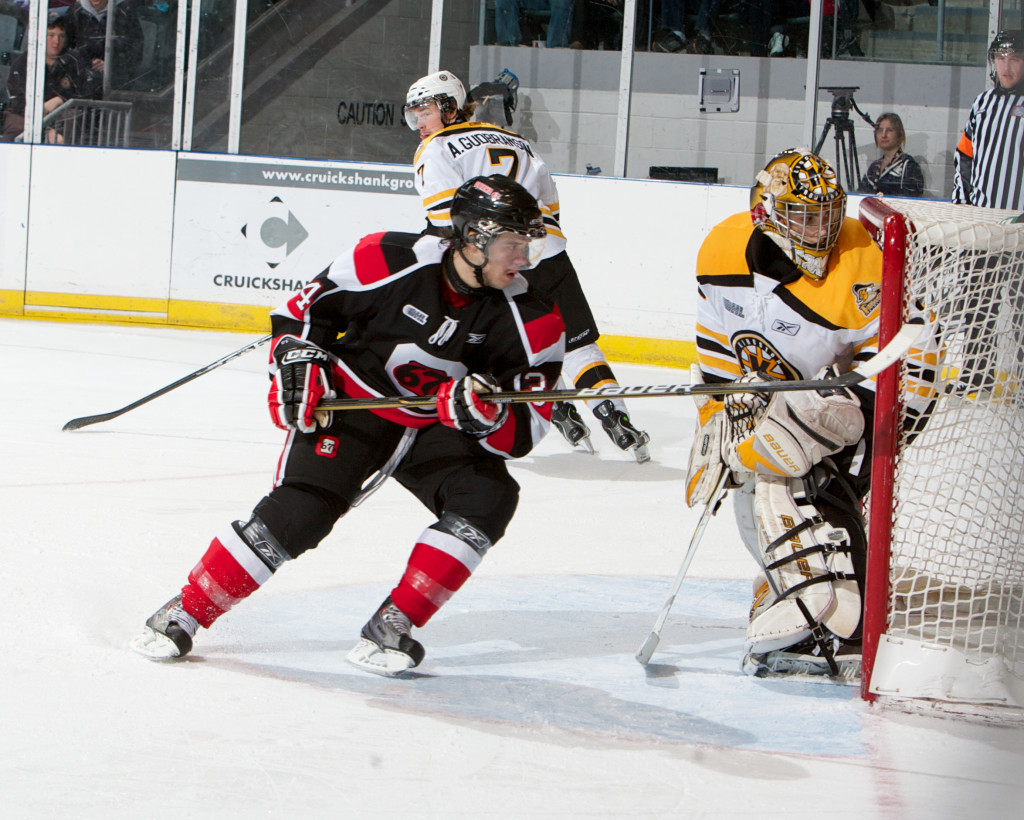 KINGSTON — Prior to Sunday’s Ottawa-Kingston matinee, long-time Frontenacs play-by-play man Jimmy Gilchrist said listeners could expect “a real barnburner” from two OHL rivals about to face off for the 303rd time in their near-four-decade history.

This was no barnburner, although the locals’ barn did start to figuratively burn, a stunning, startling blaze that ignited midway through the first frame and was soon fully involved.

A couple of hours later, all that remained was the mental clean-up of debris and destruction from a thorough thumping at the hands of the high-flying 67’s, who tallied five unanswered goals in the opening period before coasting to a 7-1 victory.

“Believe me, we would’ve taken a 2-1 road win in overtime and been happy,” said 67’s coach Chris Byrne, whose club moved four points up on Kingston atop the Eastern Conference standings.

“We didn’t expect this, but we’ll take it. We killed a few penalties early on, then got some bounces and went from there. But this wasn’t a 7-1 game.”

Defenceman Julian Luciani opening the scoring at 11:59 on a 55-foot floater over the glove of screened Kingston goalie Philipp Grubauer. Less than a minute later, it was 3-0 as Jake Cardwell and Cody Lindsay tallied 30 seconds apart. Sean Monahan and Tyler Toffoli added two more rapid-fire efforts.

At the other end, Czech import Petr Mrazek, selected the game’s first star, was solid throughout. He turned aside all 18 shots in the first period and all but one of 43 in the game.

“Nic did a great job,” said Byrne. “He came away with a couple of nicks and bruises and stuck his nose in there when he had to. That’s the kind of effort that doesn’t always show up on the scoresheet, but it’s the kind you need to win games.”

Ottawa native Erik Gudbranson took a checking-to-the-head major penalty, a 10-minute misconduct and a game misconduct for a jarring hit on Ottawa’s Cosimo Fontana early in the third period.

The Ottawa player lay prone on the ice for several minutes before being helped off and taken to local hospital with what Byrne suspected was a concussion.