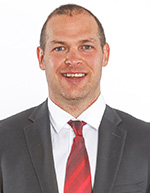 The Ottawa 67’s strengthened their coaching staff prior to the 2017/18 season with the appointment of Norm Milley as Assistant Coach. The now-retired right winger brings his wealth of experience, gained over 17 years of playing professional hockey, to the hockey club.

Milley has extensive knowledge of the game, having played in the OHL, NHL, AHL and also in Europe. He spent his last nine years playing in the German league (Deutsche Eishockey Liga) for Wolfsburg first and then for Düsseldorf. He retired after the 2016-17 season.

The Toronto native was selected by the Buffalo Sabres in the second round (47th overall) of the 1998 NHL Entry Draft. He had a successful junior career with the Sudbury Wolves in the OHL, which led to a contract with the Sabres. Milley then spent five seasons with Buffalo’s AHL affiliate, the Rochester Americans. During his time with the Americans, he scored a series-clinching, overtime goal in the 2003-04 AHL playoffs.

In 2005, Milley signed with the Tampa Bay Lightning and also scored his first NHL goal that season. He spent three seasons there, playing for Lightning’s AHL affiliates Springfield Falcons and Norfolk Admirals.

Milley moved to Europe in the 2008-09 season and had a successful seven seasons with the Grizzly Adams Wolfsburg. Out of the seven seasons, three were as co-captain. At the end of 2015, he moved to Düsseldorfer EG where he spent his final two seasons as a player.

With a total of 21 years of playing hockey, from OHL to the German league, Milley has a lot to offer in the coaching department with the 67’s.