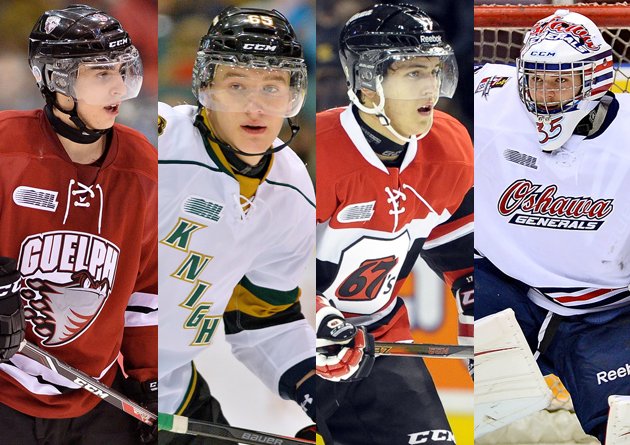 Robby Fabbri of the Guelph Storm is the OHL’s Player of the Month for February after leading the league in scoring with 23 points in 12 games.  The 2014 NHL Draft prospect tied for the league-lead with 11 goals last month and also collected 12 assists with a plus-minus rating of plus-9 for the OHL’s top ranked team.  Fabbri recorded an impressive nine multi-point contests with the Storm earning a victory in eight of those games while losing two of the three games where he was held without a point.  Fabbri received first star honours twice last month while his best offensive performance earned him second star on February 21 matching a career-high with four points scoring once with three assists in a 6-4 win over the Windsor Spitfires.

Fabbri, an 18-year-old from Mississauga, ON, is playing in his second OHL season with the Storm.  Eligible for the 2014 NHL Draft, Fabbri was ranked 25th by NHL Central Scouting among North American Skaters in their Midterm Rankings released in January.  Fabbri is currently tied for 12th in league scoring with 81 points in 53 games with 42 goals and 39 assists.

Nikita Zadorov of the London Knights is the OHL’s Defenceman of the Month for February scoring six goals and seven assists for 13 points in 12 games while producing a plus-minus rating of plus-10.  The Buffalo Sabres prospect helped the Knights earn 11 wins last month while recording five multi-point games.  Zadorov opened the month with his first career two-goal game on February 1 as first star of a 5-4 win over the Barrie Colts, then set a career-high with three points including two goals and one assist on February 14 in a 9-5 win over the Sarnia Sting where he also earned first star honours.

Zadorov, an 18-year-old from Moscow, Russia, is playing in his second career OHL season with the Knights.  Selected by the Sabres 16th overall in the 2013 NHL Draft, Zadorov played seven games in the NHL this season before returning to the Knights in November where he has since tallied 11 goals and 17 assists for 28 points in 31 games.

Travis Konecny of the Ottawa 67’s claims OHL Rookie of the Month honours for the fourth time this season after leading all rookies in scoring with 16 points in 12 games.  Last season’s first overall pick scored five goals and 11 assists helping the 67’s win six games in February to stay in the hunt for an Eastern Conference playoff position.  Konecny recorded six multi-point games last month including two three-point performances with a goal and an assist on February 7 as second star of a 7-2 win over the Sarnia Sting, also netting a goal and two assists on February 12 as third star of a 4-3 overtime win over the Belleville Bulls.

Konecny, a 16-year-old from Clachan, ON, currently holds a 14-point lead in the rookie scoring race with 67 points in 58 games including 24 goals and 43 assists.  The graduate of the Elgin-Middlesex Chiefs earned ALLIANCE Player of the Year honours last season before becoming the first 67’s player to be selected first overall since Alyn McCauley in 1993.

Ken Appleby of the Oshawa Generals is the Vaughn OHL Goaltender of the Month for February after posting a 6-1-0-1 record including two shutout victories while earning a league-best goals-against-average of 1.63 along with a save percentage of .943.  Appleby allowed just 12 goals in eight games and won six straight starts for the Generals who have clinched first place in the Eastern Conference standings while earning their first East Division title since 1991.  Appleby posted back-to-back shutouts including a 21-save performance on February 9 as second star of a 4-0 win over the Peterborough Petes, then made 20 saves on February 14 as third star of a 6-0 win over the Ottawa 67’s.

Top OHL Performers of the Month: