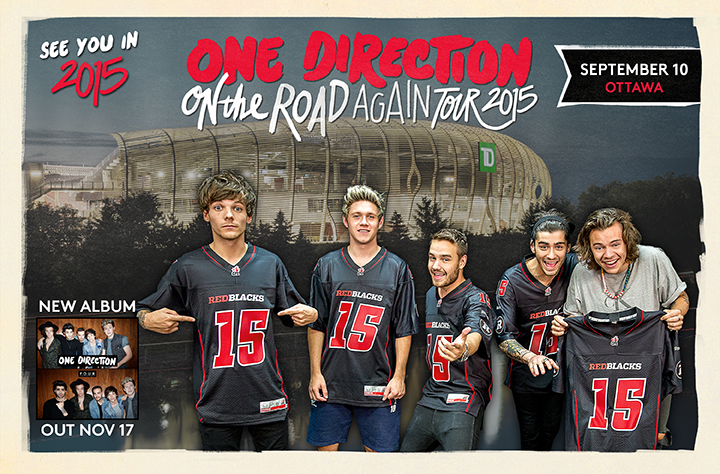 ONE DIRECTION ADD ADDITIONAL OTTAWA TOUR DATE AS PART OF WORLDWIDE TOUR THURSDAY, SEPTEMBER 10, 2015 AT THE STADIUM AT TD PLACE

Global superstars One Direction today announced they have added a second tour date in Ottawa on September 10, 2015 at The Stadium at TD Place as part of their highly-anticipated ON THE ROAD AGAIN 2015 stadium tour.

The ON THE ROAD AGAIN 2015 stadium tour, will see the band perform in Australia, Japan and South East Asia in support of their new album FOUR (to be released Nov. 17). The North American tour, promoted by Live Nation, kicks off on July 9, 2015 at the Qualcomm stadium in San Diego, Cali. For a full list of European and North American tour dates and on-sale dates, see below.

Niall comments “We could not be more excited about the new tour. We’ve started rehearsing songs from the new album and can’t wait for the fans to hear them live. We’re just so very thankful to our amazingly loyal fans – they make it possible for us to play in these incredible places and continue to surprise us every day with their unwavering support.”

Fans will have access to a pre-sale by visiting the band’s Facebook page on Wednesday, Oct. 29. American Express is the official credit card of the Canadian leg of the ON THE ROAD AGAIN 2015 North American tour. American Express card members can purchase tickets before the general public. Additional details are available at www.livenation.com.

The music video for the band’s lead single ‘Steal My Girl’ premiered globally on VEVO. The outlandish video, filmed in Palmdale, CA, is directed by Benjamin and Gabe Turner and features a cameo from Hollywood legend Danny Devito.

With a staggering 94 number ones and over 46 million records sold, in just four short years, One Direction have gone from energetic pop upstarts to international superstars. As the band’s song writing becomes more personal with each record, FOUR is set to be their most stunning yet. The album follows the global success of their huge sell out WHERE WE ARE stadium tour and the 3D film documentary THIS IS US. Fans also had the opportunity to relive this summers’ tour with the release of their second film WHERE WE ARE: THE CONCERT FILM, which broke records as the biggest ever Event Cinema audience across one weekend. The WHERE WE ARE: THE CONCERT FILM DVD will be released on Dec. 2. Add all this to their 3 billion YouTube views, 109 million combined Twitter followers and 33 million Facebook fans and it’s clear that Liam, Harry, Louis, Niall and Zayn genuinely are a worldwide phenomenon.

FOUR will be released globally on Nov. 17, 2014 via Syco/Columbia Records. Fans can receive the band’s first single “Steal My Girl” instantly if they pre-order the deluxe album on iTunes: http://smarturl.it/1DFouriTdlx.

ON THE ROAD AGAIN 2015 EUROPEAN AND NORTH AMERICAN TOUR DATES

All dates on sale Nov. 1 unless otherwise noted. All dates and venues below subject to change.