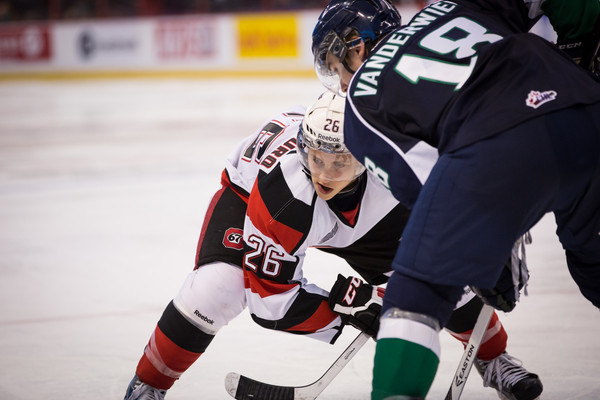 If the Ontario Hockey League playoffs began today, the Ottawa 67’s would be on the outside looking in.

Fortunately, the 67’s have until mid-March to make amends.

The 67’s fired 42 shots on the Plymouth Whalers net only to find a wall in Alex Nedeljkovic in the Whalers goal as the 67’s dropped a 3-1 contest at the Compuware Arena Saturday night in Plymouth, Michigan.

The loss, combined with the Niagara IceDogs 5-4 overtime win over the Windsor Spitfires, dropped the 67’s into 9th place in the overall Eastern Conference standings and the 67’s return home to face the Belleville Bulls Friday night at the Canada Tire Centre off a 1-2 road trip in need of wins in a hurry.

The 67’s went back to Philippe Trudeau, the Ontario Hockey League leader in saves with 1,321, and the overage stalwart stopped 29 of 31 after missing his first start Friday after making 27 consecutive in the 67’s net.

The 67’s just couldn’t find an answer for Nedeljkovic.

Plymouth scored the only goal of the opening period with the well-travelled Zach Lorentz, the Whalers his fourth OHL stop in four seasons, scoring just 2:08 in as the 67’s spent 4:55 of the period on the penalty kill.

The teams traded goals in the second with Lorentz counting his second of the night before 67 Dante Salituro tied it on the power play in the period’s final minute.

Matt Mistele cinched it with en empty net goal with 44 seconds remaining to make a winner of Nedeljkovic with 41 saves on 42 shots.

Up next, the 67’s have a home-and-home with the Bulls, who are four points behind the 67’s, and then a home game next Sunday with the Peterborough Petes, who sit 6th, six points up on Ottawa.