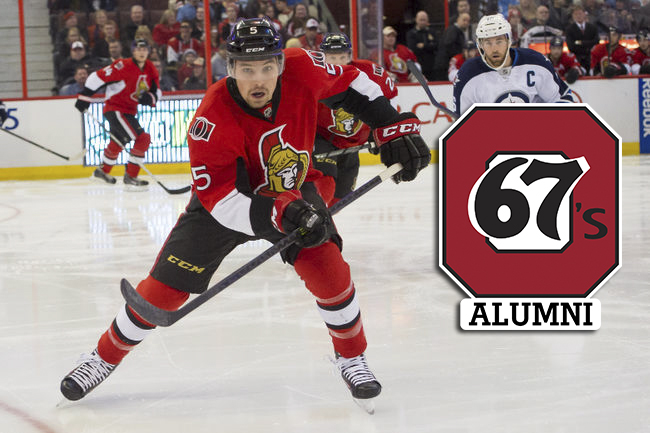 Your Ottawa 67’s had a great 2014-2015 season, finishing fourth in the OHL’s Eastern Conference and reaching the playoffs for the first time in three years. Unfortunately though, a first round exit saw their post-season run cut short.

While the team didn’t go as far as we would have liked, many Ottawa 67’s alumni are carrying on the playoff push with their respective pro clubs. Let’s take a look around the NHL (and AHL) and check in with some former 67’s greats in the post-season.

Sean Monahan
We start out west with an all-Canadian matchup between the Vancouver Canucks and Calgary Flames. Sean Monahan was a special player when he played in Ottawa, and as the first-line centre in Calgary, he continues to impress. Monahan’s Flames lead the best-of-seven series 3-2, after an elimination game win by the Canucks last night. Calgary will have two more chances to knock out the Canucks, the first of which comes Saturday night.

Cody Ceci
This hometown hero has gone from playing road hockey on the streets of Ottawa suburb, Orleans, to patrolling the blue line for the Ottawa Senators, with a stop in between as a member of the Ottawa 67’s. Ceci, along with Monahan – both former 67’s co-captains – are making their NHL playoff debuts.

Ceci’s Senators are down 3-1 in their series against Montreal, but they’re not out yet. Ottawa went on an unbelievable 24-3-3 run to conclude the regular season and hope to harness that energy to complete the comeback. Their backs are against the wall tonight, as they must win to force a Game 6 back in Ottawa.

Petr Mrazek
The Czech-born goaltender stole the starter’s role when Red Wings’ veteran Jimmy Howard fell to injury in the last half of the season. Mrazek, who’s now played 40 regular season games for Detroit over the past three years, is also getting his first taste of the NHL post-season.

He’s started all four playoff games for the Red Wings. After giving up five goals against Tampa Bay in Game 2, he answered back in a big way by posting his first NHL playoff shutout. Powered by his outstanding play, Detroit is all tied up 2-2 with the offensively-gifted Lightning in their first-round matchup.

Bryan Bickell
Unlike the first three Ottawa 67’s alumni, Bickell is not an NHL playoff rookie. This post-season warrior has 35 points in 61 playoff games, and more importantly, two Stanley Cup rings with the Chicago Blackhawks. The 6’4”, 224lb. power forward has been a part of some great teams in Chicago over the past six seasons. This year the Blackhawks are entrenched in a first round battle against the Nashville Predators. They have the Predators down 3-2 and hope to eliminate them Saturday night in Nashville.

Alex Lintuniemi
As the most recent departure from the Ottawa 67’s, Alex Lintuniemi recently signed with the NHL club that drafted him, the Los Angeles Kings. Though L.A. narrowly missed the NHL playoffs this year, their AHL affiliate, Manchester Monarchs, sit atop the standings heading into the post-season. They’ll meet the Phoenix Coyotes farm team, Portland Pirates, in the first round of the AHL playoffs.

The dominating defenseman will face-off against a familiar foe in former Niagara IceDogs forward Brendan Perlini. The two recently met in the OHL’s Eastern Conference Quarter Finals and Lintuniemi is hoping to exact some revenge for the rest of his former 67’s teammates.