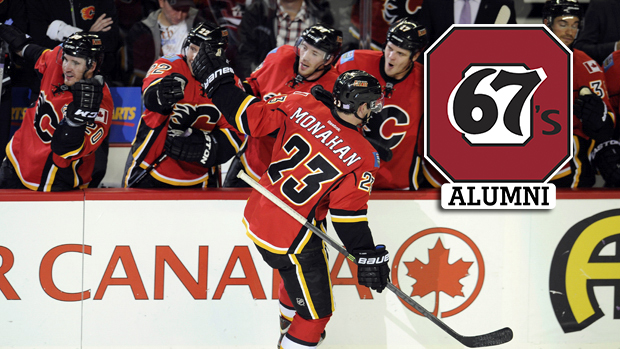 With the first round of the NHL playoffs coming to an end last night, let’s take another look at how some Ottawa 67’s alumni are doing in the post-season as they head into Round 2.

Sean Monahan
Last we checked, Monahan’s Calgary Flames had the Vancouver Canucks right where they wanted them. They were up three games to one, Vancouver won game 5, but Calgary took the next game to finish off the Canucks in six. The Flames will kick-off their second round series against Anaheim tonight. Monahan is extremely excited to face-off against NHL superstar Ryan Getzlaf. “That’s something that I look forward to and something that I want to do,” said Monahan, “If you can out-battle Getzlaf or be better than him or shut him down, you have a good chance of winning that game.”Calgary will be in tough to displace the dominating Ducks, but they’ve had a story-tale season so far and hope to continue that trend.

Bryan Bickell
Bickell and his Blackhawks teammates eliminated the Nashville Predators from the first round in six games. Bryan had two assists and eight penalty minutes in that series. He’s looking forward to contributing even more against the Minnesota Wild in the next round. In the last two playoff series versus Minnesota, Bickell has seven goals and four assists, a definite presence in front of the Wild’s net. “That falls more into my hands,” Bickell said. “I’m not a Patrick Kane kind of player. But for us to win this series it’s going to be one of those muck and get the puck to the net series, create havoc in front because Dubnyk has been outstanding since he’s been there.” Bickell is right, Minnesota goaltender Devan Dubnyk has been outstanding, but Bryan’s 6’4″, 223lbs frame should prove troublesome for him. Chicago and Nashville drop the puck on their second round series Friday night.

Alex Lintuniemi
The Finnish-born blueliner went from the OHL playoffs almost directly into the AHL playoffs. After the 67’s were unfortunately eliminated by Niagara, Alex was signed to an amateur try-out contract by the Manchester Monarchs. He played four regular season games for the LA Kings affiliate before being signed to an entry-level deal by the NHL club. His new team, Manchester, is up 2-1 on the Portland Pirates in their best-of-five series. They’ll look to close things out in Portland at 7 p.m. tonight.

Cody Ceci and Petr Mrazek
Sadly these two Ottawa 67’s alumni were eliminated in the first round of the NHL playoffs. Ceci’s Ottawa Senators could not pull off the impossible. They were down 3-0 to the Montreal Canadiens, but after taking games 4 and 5, Canadiens goaltender Carey Price slammed the door shut on the Sens’ season in game 6.

Mrazek led his Detroit Red Wings into Game 7 against the Tampa Bay Lightning. He did his job, only allowing one goal, but his teammates could not beat his counterpart, Lightning goaltender Ben Bishop. Mrazek looked great in his first taste of NHL post-season action and has definitely sparked a goaltending controversy in Detroit heading into next season.