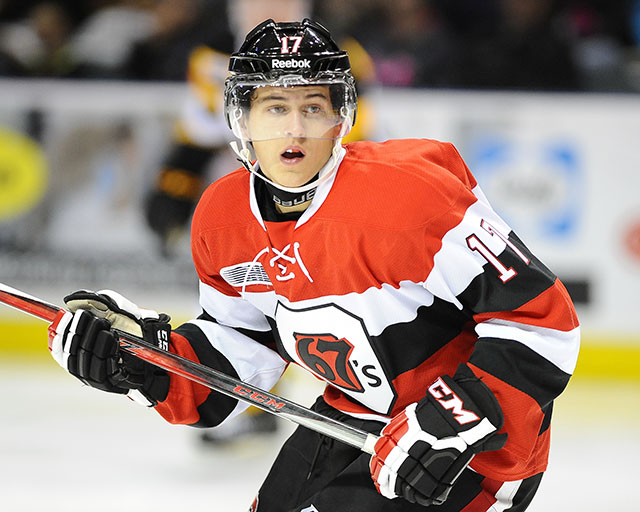 MARCH 17, 2014 — OTTAWA — For the Ottawa 67′s, the 2013-14 season is over, narrowly missing the playoffs after losing to the North Bay Battalion.  Despite a disappointing season, there is something at hand making to take notice.  Clachan, Ontario native Travis Konecny led the team in scoring with 26 goals, and 44 assists, for 70 points.  That’s pretty good for a 17-year-old rookie.

This time last year, Travis Konecny was playing for Elgin-Middlesex Chiefs Minor Midget team, in a league that put him against other players his own age. The scouting report from the 67′s who would ultimately draft him first overall into the OHL read: “Top-end forward with great hockey sense as well as skill. Moves the puck well at all times and competes in all situations.”  He finished his minor league career with 53 goals, 61 assists, in only 54 games.

Since joining the 67′s this season, Konecny has not only led the team in scoring, he’s done it in a league against players ranging from ages from 16 to 20. Travis took the OHL by storm this season while primarily playing on a line with 19-year-old Erik Bradford and 20 year-old player Ryan Van Stralen.  Considering that Ottawa does not currently have a single NHL draft pick on their team, his performance has been nothing less than spectacular.  Konecny will likely win well deserved OHL rookie of the year honors this season. He’s been a highlight reel regular all year with his soft hands and strong play, and good hockey sense.

Let’s compare his numbers with other notable NHL players during their first OHL season.Konecny is still growing measuring 5’10, 166 lbs.  His draft year into the NHL is 2015.  With continued progress, and determination, there is no doubt that Konecny will place high in the draft, and could be on his way to a long and prosperous NHL career.  Some believe he be the next Tyler Seguin, Sean Monahan, or Corey Perry?  He very well could be.

Anaheim Ducks forward and Olympian Corey Perry had 28 goals, 31 assists, 59 points in his rookie campaign with the London Knights.

Putting this in perspective, Konecny is ahead of some pretty impressive NHL stars.  Plenty of junior stars are complete success stories in junior, without making much of an impact in the NHL. There is little reason to believe Konecny.  The next logical step along with an outstanding follow-up season would be to represent Canada on an international level.  This will likely take place at the next under-18 World Junior Championships.  All in all, yet another experience from which to learn and prosper.

Next season, much will be expected of this 67′s center, including more scoring, playmaking, work in the defensive zone, and continued improvement in all aspects of his game.  Seeing that Konecny has been a success at everything he’s attempted in his young hockey career, there is no reason to believe he’s not up to the challenge.  Before long, other players will no longer look to him as a rookie, but a leader and example for others to follow.