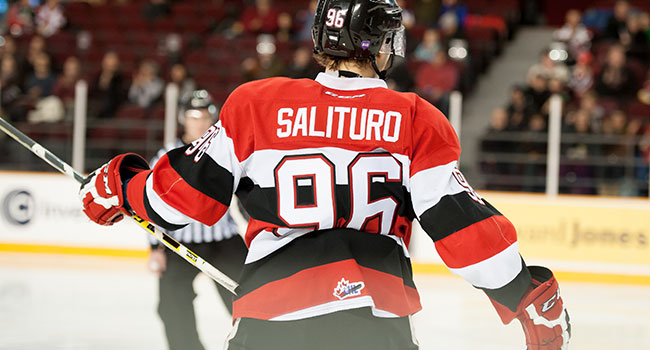 When Dante Salituro scored his 250th point Feb. 26 against the Sudbury Wolves, the 67’s forward joined an exclusive club as one of just 25 players to have hit the milestone with the Barber Poles in the club’s nearly 50 years.

Not only does Salituro’s 250th point land him in 25th spot on the all-time list of 67’s scorers, the 19-year-old forward could catch some of the very notable names ahead of him, should he return to junior for his overage year next season.

To celebrate Salituro’s achievement, we take a look at a few other famous names who have reached the 250-point mark in Ottawa.

2. Bobby Smith (1975-78): Not every junior hockey star goes on to tear up the NHL, but the legendary Bobby Smith certainly did. He may not have beat Lee’s record, but at 187 games he played nearly 100 fewer games than Lee, scoring 385 points in the process. After being drafted first overall by the Minnesota North Stars in 1978, the Nova Scotia product went on to score 1,036 points in 1,077 games, winning the Stanley Cup with the Habs in 1986.

3. Andrew Cassels (1986-89): A former 67’s forward with ties to the current team, Andrew Cassells played just three seasons (183 games) for the Barber Poles but put up a whopping 377 points in the process. Cassels, uncle of current 67’s sophomore Travis Barron, translated his junior success into a great NHL career during which he scored 732 points in 1,015 games.

5. Denis Potvin: No list of star 67’s alumni would be complete without the great Denis Potvin, the Hall of Fame defenceman who tore it up in the OHL before what would become a legendary NHL career as a member of the New York Islanders dynasty. Before recording 1,052 points in 1,060 games, Potvin put up 329 points – including 234 assists – in 254 games in what was then known as the OHA. He has since followed up his playing career with a successful run as a color commentator, which included a few years calling games for the Ottawa Senators.