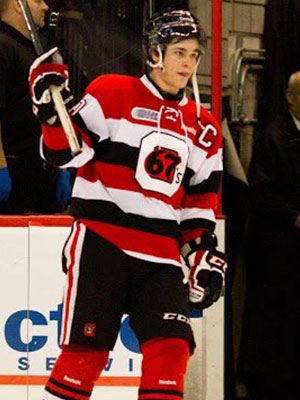 During the 2010 OHL Priority Selection the Ottawa 67’s used their first round pick (16th overall) to select Sean Monahan. At the time of the draft, Monahan was not a lock to make the roster. There were only three roster spots available and it was hoped that Monahan would battle for one of them.

Monahan’s 67’s career did not start of as he would have hoped. During his first shift at the opening day of training camp, Sean took a hit into the boards and sprained his wrist sidelining him for a few weeks. As a result of the injury, he had a slow start but still earned a spot on Team Ontario during the 2011 for Under-17 Hockey Challenge.

Monahan played a pivotal role in Team Ontario winning gold at the tournament. During the Semi-Finals, Team Ontario played Team Quebec to a 2-1 decision. Both Team Ontario goals were scored by Monahan, with the second one being scored in overtime. As a result of Monahan’s performance, Team Ontario had a spot in the Gold Medal game against the United States. Monahan scored a pair of goals for the second game in arrow, including the game winner once again as Team Canada won 5-3. Monahan finished the tournament with a team high, seven points in six games. Monahan returned to the Barber Poles with a ton of confidence and finished the season with 47 points in 65 games.

During the offseason, Monahan was selected to be part of the Ivan Hlinka Memorial Tournament, scoring a goal for Team Canada in the gold medal game as the team went on to win their fourth consecutive gold medal.

During his second season with the team Monahan saw a jump in production, going from 47 points year one to 78 points year two. Monahan also was a member of Team OHL during the Canada-Russia Summit Series and played on the first Summit Series game at the Arena at TD Place. Team OHL won the offensive heavy game, 10-7. Monahan went on to be drafted in the first round, sixth overall by the Calgary Flames.

He returned to the 67’s the following season, scoring 78 points once again, but this time in less games, upping his productivity from 1.26 points per game to 1.34. That season however, was a rebuilding one for the team and the 67’s finished bottom in the division.

The following season, Monahan made the jump to the NHL and has remained with the Calgary Flames since. His most productive season was 2015-2016 where he scored 63 points in 81 games. In May of 2017 Monahan was awarded the Scurfield Humanitarian Award, a Calgary Flames team award given to the player who “best exemplifies the qualities of perseverance, determination and leadership on the ice, combined with dedication to community service.”