Season over for 67’s following loss in North Bay 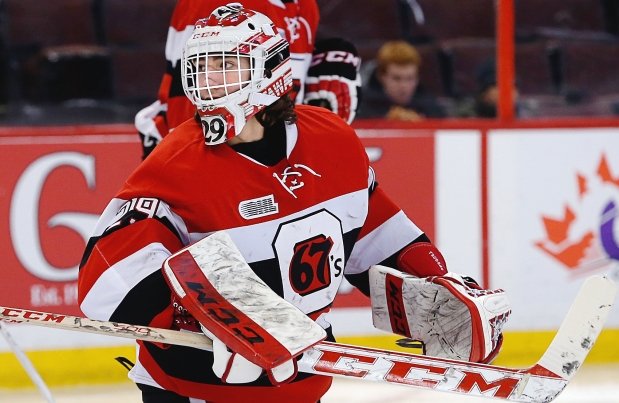 The curtain has closed on the Ottawa 67’s 2013-14 season and now the team can look forward to returning to TD Place and Lansdowne.

The 2013-14 campaign came to an end on Sunday afternoon after losing to the Battalion 12-1 at the North Bay Memorial Gardens.

Ottawa needed to win on Sunday and hope for a regulation loss by the Mississauga Steelheads against the Kingston Frontenacs. The Kingston part of the equation came through when the Frontenacs beat the Steelheads, but the 67’s could not make it work against the Battalion. A win wouldn’t have clinched a playoff spot for Ottawa, but would have forced a one-game playoff against Mississauga.

Trailing 3-0 after the first on goals by Connor Jarvis, Vincent Praplan, and Zach Bratina, the 67’s were outshot 25-5 in the middle frame and were outscored by a 6-1 margin.

Overage goalie Philippe Trudeau left the game in the second period after allowing the sixth North Bay goal and was replaced by Liam Herbst, but returned to the crease to complete a fine season and his junior hockey career in the final frame.

Connor Jarvis and Jared Steege led the Battalion for two goals and an assist each, while Brett McKenzie also scored a pair for North Bay.

Ryan Van Stralen had Ottawa’s only goal, his 29th of the season, in his final game in junior hockey.

The 67’s finished the season ranked 18th in the 20-team league and will pick third overall when the Ontario Hockey League Priority Selection on April 5.