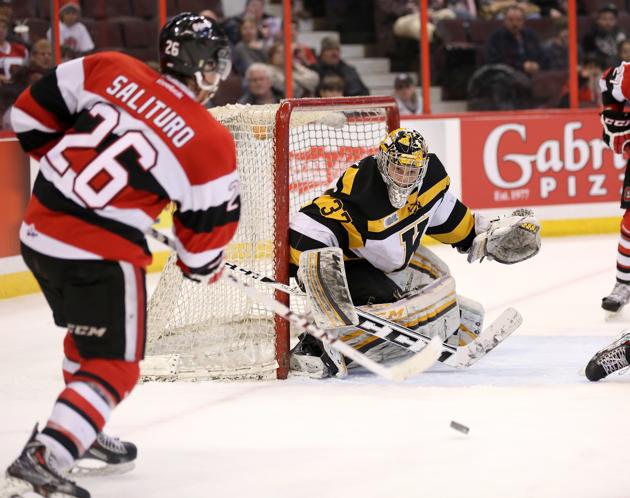 The future of the 2013-14 season for the Ottawa 67’s will be determined in a photo finish.

After earning a point in a 5-4 overtime loss to the Frontenacs on Friday night in Kingston, the 67’s will travel to North Bay for the final game of the regular season with the team’s playoff future hanging in the balance.

The 67’s have 52 points and sit a pair of points behind the eighth-place Mississauga Steelheads who currently hold the final playoff spot after a shootout win over the Niagara IceDogs last night. Despite the loss, the IceDogs clinched a playoff spot by earning a point.The Belleville Bulls, meanwhile, were eliminated from playoff contention when the Oshawa Generals won in overtime with 2.7 seconds remaining.

In Kingston, the 67’s pressed for a victory, holding a 4-2 lead late in the third, but the Frontenacs scored twice in the final five minutes of regulation and secured the win with 19 seconds left in overtime when Robert Polesello beat Ottawa goalie Philippe Trudeau.The goal came moments after the Frontenacs killed a penalty and goalie Matt Mahalak robbed Dante Salituro with two point-blank saves to prevent Ottawa from a win and a valuable extra point in the standings.

Ottawa appeared in control with a 4-2 lead early in the third when Tyler Hill scored his 10th goal of the season. Kingston, however, carried the play in the 67’s zone for most of the third and tied the game on markers by Polosello with 4:39 left and Mike Moffatt with 1:12 to go while Sam Studnicka in the box serving a tripping penalty.

Salituro, Travis Konecny and Connor Brown also scored for Ottawa, while Henri Ikonen and Darcy Greenaway had the other goals for Kingston.

Mississauga has one game remaining, Sunday at home against the Frontenacs. The 67’s must win on Sunday in North Bay and Mississauga must lose in regulation against Kingston for Ottawa to have any hope of extending the season.