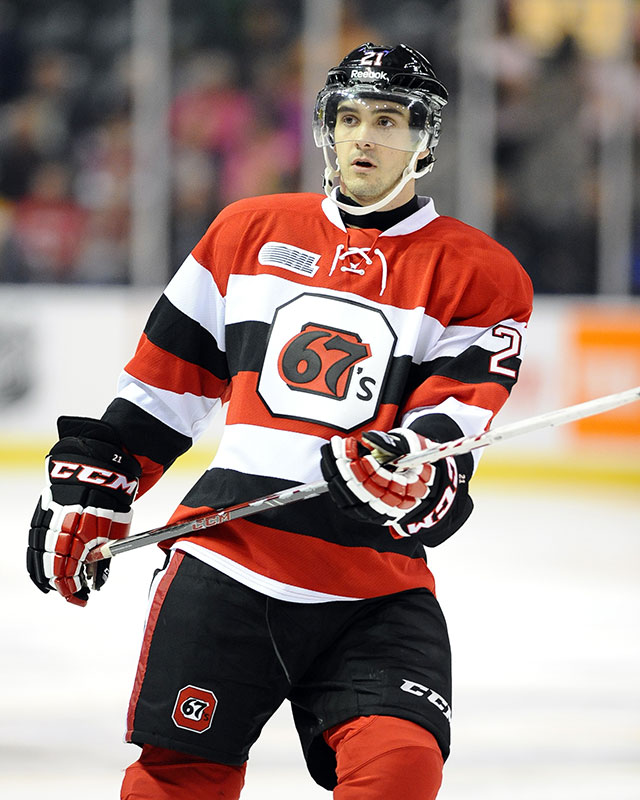 Jake Middleton took in a Toronto Blue Jays game with family Saturday, trying to distract himself from what was happening in Philadelphia.

He was partially successful.

The big defenceman from Stratford admitted there was some nail-biting going on at Rogers Centre as the 2014 NHL draft wound down to its conclusion eight hours away.

Then, finally, Twitter began to buzz with the news, including this gem from the Los Angeles Kings: “Exhale @MiddzClassy. We got you buddy. The final pick of the #NHLDraft!”

“Holy Heart Attack,” Middleton tweeted in response as he snuck in as the 210th overall pick by the Stanley Cup champions.

“It was pretty funny,” Middleton said of the tweet from the Kings. “Obviously it’s in the back of your head that it (the draft) is coming to an end and there was some nail-biting.

“To get picked by a team like L.A. is something special and pretty exciting. But no matter where it was or what team, it’s still an honour to be picked.”

Middleton played minor hockey in Stratford and then with the Huron-Perth Lakers triple-A organization — appearing in a handful of games with the Stratford Cullitons of the GOJHL — before being selected by the Owen Sound Attack eighth overall in the 2012 Ontario Hockey League draft.

His first OHL season was cut to just 29 games by injury and then a trade to Ottawa. But he appeared in 65 games with the 67’s this past season, scoring two goals and adding 21 assists while totalling 64 penalty minutes.

He expects to play a couple more seasons in the OHL before he makes the leap to the pros.

“I’ve got two or three more years of junior where I can excel even more, so I’m looking forward to the next two seasons in Ottawa and hopefully I can make something of it and have L.A. want to sign me to a pro contract,” he said.

“Ottawa’s a great city and a great organization. We were in the second year of our rebuild so still pretty young and inexperienced, but once you got things rolling and playing your game it got a lot better throughout the season.”

Middleton was rated 87th on the midterm rankings of North American skaters, then slipped to 172nd in the final ranking. He said he never got feedback on why his stock may have dropped.

“I didn’t hear from any team and I don’t know what their feelings are about that,” Middleton said. “I met with a couple of teams (at the NHL Combine) and my skating was a big factor for them. Right now I’m working with power skating coach Bob Mackowski in Kitchener twice a week and looking to turn that around right away.”

It’s been a big year for the Middleton family. Younger brother Keaton, a 6-foot-5, 200-pound defenceman, was chosen 50th overall by Saginaw in the third round of the OHL draft.

Selected much earlier on Saturday by Los Angeles was Listowel native and Kingston Frontenacs defenceman Roland McKeown, who was taken 50th overall.

McKeown was ranked No. 27 on NHL Central Scouting’s final list of the top North American skaters eligible for the draft, the sixth-highest defenceman on the board. Some experts pegged him as a potential first-rounder.

Just five defencemen were chosen in the first round on Friday night, including first overall pick Aaron Ekblad of the Barrie Colts.

But McKeown then had to wait and watch six other defencemen taken in the second round — three Swedes, two Americans and one Czech — before he became the first Canadian defenceman taken in that round, and the fourth overall of the draft.

The Kings dealt 22-year-old right winger Linden Vey to the Vancouver Canucks for the 50th pick to make McKeown their second choice in the draft.

“It’s a dream come true,” McKeown told KingsVision online video. “To come to a team that won the Stanley Cup, a very successful organization, and for them to trade for that pick makes it just that more special.”

The second overall pick in the 2012 OHL draft by Kingston, the six-foot, 195-pound McKeown established career-high numbers across the board this past season with 11 goals, 32 assists, 43 points, 61 penalty minutes and a plus-38 rating in 62 regular-season games.

McKeown played minor hockey in Listowel, then joined the Huron-Perth Lakers and later the Toronto Marlboros triple-A organization. He has represented Canada at Under-17 and Under-18 tournaments.

Defenceman Jake Muzzin of Woodstock was one of the stars of the team’s Stanley Cup run.

The Kings’ assistant general manager is Rob Blake of Simcoe, a former NHL defenceman who played junior hockey in Stratford before going on to an outstanding professional career that was recently recognized with an appointment to the Hockey Hall of Fame.

The director of player development for the Kings is another former Culliton, Nelson Emerson.

Former Brantford/Caledonia defenceman Brandon Montour, from Ohsweken, was taken with the 55th overall pick by the Anaheim Ducks.

Waterloo, Ont. defenceman Kyle Wood, who played a few games with the Siskins as a minor midget in 2012, was taken 84th overall by Colorado. He is with North Bay (OHL).

“It was pretty amazing,” McCann told CanucksTV about being selected by a Canadian team. “It’s a special moment for me and my family. I’m looking forward to my future with Vancouver.”

The six-foot, 174-pound McCann played minor hockey in Stratford, then later with the Huron-Perth Lakers and the Elgin-Middlesex Chiefs and London Jr. Knights triple-A organizations.

Drafted fourth overall by Sault Ste. Marie in the 2012 OHL draft, he has 106 points in 128 games over two seasons.