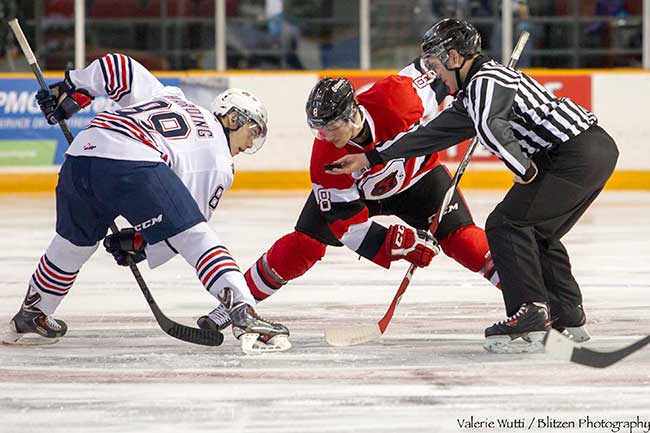 OTTAWA — The winning streak for the Ottawa 67’s came to a halt at seven on Sunday with a 5-3 loss in Oshawa to the Generals.

On the 35th anniversary of the biggest upset in hockey history by the U.S. team over the Soviets in Lake Placid, the 67’s were trying to pull off a shocker of their own against the top team in all of junior hockey, but it wasn’t meant to be.

All was not doom and gloom for the Ottawa side, however. As much as the 67’s would have loved to knock off the favourited team to emerge from the Ontario Hockey League and be its representatives at the Memorial Cup in Quebec City in May, the 67’s took solace in qualifying for the playoffs for the first time since the 2011-12 season.

The Mississauga Steelheads lost in Guelph on Sunday, a result which clinched for Ottawa at the very least eighth place in the Eastern Conference standings.

The 67’s are looking to secure a top-four ranking, which would deliver home-ice advantage in the opening round of the post-season.

Ottawa sits in third, nine points back of the Barrie Colts, two points ahead of fourth-place North Bay and nine up on fifth-place Niagara

In the game on Sunday, the 67’s were down 3-1 at the end of the first, but ralled to tie the match with goals in the second from Nathan Todd, his second goal of the game. and Adam Craievich.

The Generals killed a pair of penalties in the final period and took the lead late on a goal by Bradley Latour past Liam Herbst who made his eight consecutive start in net for the 67’s.

Cole Cassels added an empty netter for his second goal of the game. His first came with only nine seconds remaining in the opening period.

The 67’s will practise in Ottawa early in the upcoming week before leaving on Wednesday for a three-games in three-days road trip. The first game is on Thursday in Windsor against the Spitfires, followed by matches in Michigan against Saginaw on Friday and Plymouth on Saturday.

The next 67’s home game will be on Friday, March 6 against the London Knights.

More News
A Note From GM James Boyd
21 hours ago