Strong effort by shorthanded 67’s, but no points to show 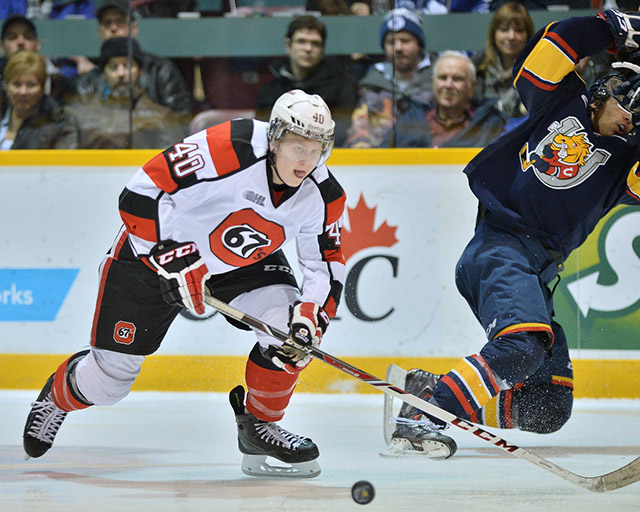 Mitchell Theoret scored the go-ahead goal for the Colts with 7:51 remaining, moments after his team killed a lengthy 5-on-3 penalty. Brendan Lemieux added an empty-netter in the final minute to seal it.

The 67’s had hoped to get the game into overtime and earn at least one point in the Eastern Conference standings of the Ontario Hockey League as the regular season heads into the final weekend with four teams having a shot at the conference’s last playoff spot.

With the Niagara IceDogs winning on Thursday over the Mississauga Steelheads 5-4 in a shootout, the 67’s are one point behind the Steelheads for for the eighth and final place in the playoffs.

Ottawa is three points back of the IceDogs and one point ahead of the Belleville Bulls who also have a shot.

The 67’s pressed during the third period and had a great opportunity to take control of the match when Jonathan Laser took a tripping penalty, followed by a checking from behind minor against Liam Maaskant who pounded Dante Salituro into the boards.

Barrie goalie Mackenzie Blackwood made several key saves during the Ottawa power play and helped his team survive. Just 14 seconds after Maaskant stepped back on the ice, Theoret got into the open and wristed a high shot past the glove of 67’s goalie Philippe Trudeau for the winner.

Ottawa led 2-0 early on goals by Nevin Guy and Brendan Bell, but the Colts came back with three of their own by Jake Dotchin, Andreas Athanasiou (his 47th of the season) and 2014 NHL draft prospect Aaron Ekblad.

Guy tied the game with a power play goal in the final minute of the second.

The 67’s were missing forward Erik Bradford who suffered a broken leg during Tuesday’s loss to Kingston, as well as Ryan Van Stralen and Troy Henley, both of whom are waiting for word from the OHL on disciplinary measures after being ejected from Tuesday’s game.

Defenceman Adrian Sloboda was also scratched from the lineup.

The 67’s have two road games left in the regular season: Friday night in Kingston and Sunday afternoon in North Bay.