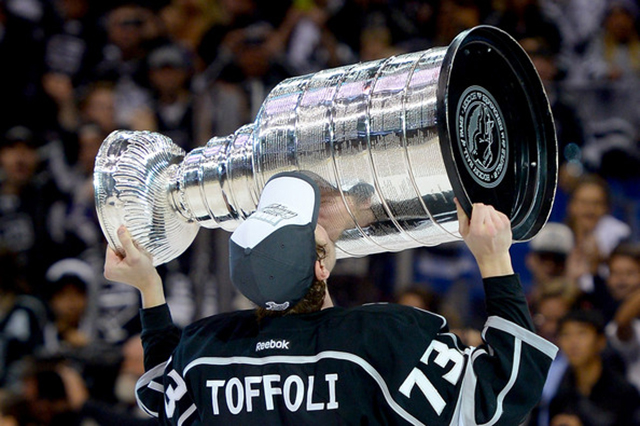 Ottawa 67’s alumni Tyler Toffoli’s career reached new heights this spring when, at the age of 22, he became a Stanley Cup Champion!

But how did he get there?

Rewind back to 2008, when the Scarborough, Ontario native was drafted seventh overall by the Ottawa 67’s in the OHL Priority Selection.

“We are very pleased to have selected Tyler Toffoli,” said 67’s General Manager Brian Kilrea. “He was one of the most explosive goal scorers our scouts have seen. Tyler has proven talent, playing on the same line as John McFarland this year’s 1st overall pick. We are looking forward to having him with the club, he has tremendous potential.”

Toffoli lived up to Kilrea’s expectations, during his four season with the 67’s scoring 380 points in his 293 games played. The right winger was the 2010-11 OHL Scoring Champion with 108 points in 68 games.

His skills in the offensive zone put him on many NHL scouts’ radar. Toffoli was drafted by the LA Kings in the second round of the 2010 NHL Entry Draft. He continued with the 67’s for two more seasons before joining the Manchester Monarchs line up in 2012.

Toffoli continued to impress in the AHL. He was named the winner of the Dudley (Red) Garrett Memorial award as the AHL’s outstanding rooking for the 2012-2013 season. Toffoli recorded 48 points in 55 games that season for the Monarchs.

Toffoli was fourth highest goal scorer during the Kings 2014 playoff run. He had a 6 plus/minus record and was a vital part of the Kings Stanley Cup victory.

The future is bright for the young centre, he still has room for improvement and is hopefully headed towards a long and successful career in the NHL.