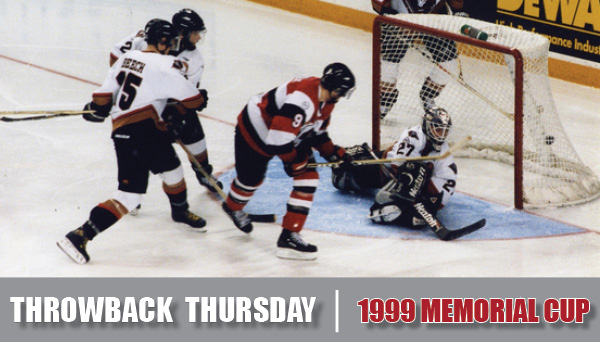 Our TD Place roommates, the CFL’s REDBLACKS, made Ottawa football history on Sunday with an epic East Final victory over the Hamilton Tiger-Cats.

Receiver Greg Ellingson and quarterback Henry Burris will be remembered always for their outstanding 93-yard touchdown, that sent the team to this week’s 103rd Grey Cup in Winnipeg.

In commemoration of that legendary play, we throwback to one of the last great Ottawa sports moments. The 67’s won the 1999 Memorial Cup at the old Civic Centre in overtime on the strength of Matt Zultek’s OT winner. Relive that unbelievable experience below and Go RRRRREDBLACKS!

Ottawa was tied 6-6 going into overtime against the Calgary Hitmen, when Matt Zultek (9) scored his second goal of the game. It was the first time Ottawa had won the CHL championship since 1984. They did so at home, in front of 10,000 screaming 67’s fans. What a night to remember! #TBT